Rebecca & Harley rise to the top! 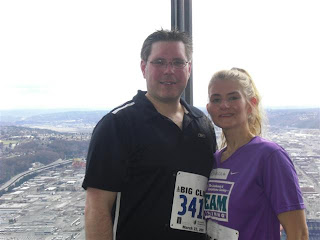 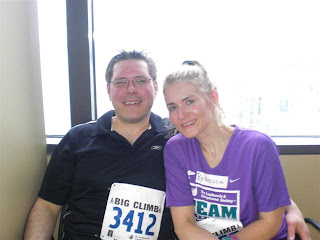 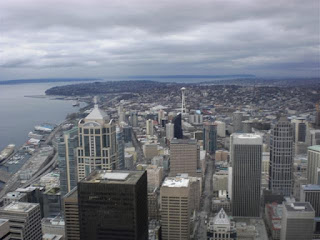 On March 22nd Harley and I and his coworker Matt, all raced to the top of the Columbia Tower in Seattle in the Big Climb for Leukemia (and a cure for other blood cancers) benefiting the Leukemia and Lymphoma Society.

Unfortunately, I do not know my exact time even though I entered the racing category and wore a timing chip. As this was my first time out of 3 years that I particpated with the racing group, I was not quite familiar with the timing chip protocal. I had assumed once I reached the top it would shut off. Seeing I thought the "chip" would keep track of time for me, I did not pay any attention to timing myself with my own watch.

In my excitement of reaching the top and wanting to cheer on Harley coming up the stairwell and get a good photo of him, I turned around after crossing the doorway to the observation deck and waited at the top of the stairs for him.

Roughly 2-3 minutes passed by before he appeared. When he reached the top and we entered the observation deck, he informed me about where to turn in the chip and asked me if I had swiped it somewhere I was supposed to in order to shut my timer off. LOL I had no idea so apparently it was still going!

When they came out with the preliminary results and posted them, I was disappointed and baffled that my time was listed as 14:20. I just could not figure it out as I did not feel I went any slower than my training pace and I started out and ended faster. In my training pace, I climbed 69 floors in about 11:26. Granted there was elevation gain in the tower compared to the stairmaster but I really did not feel that really hindered me. My lungs are in shape from my half marathon training. So I was truly puzzled.

Then before we left, Harley's time was finally posted as 14:26...only 6 seconds behind me! As I mentioned earlier, I had finished a few minutes before him so obviously my time kept running until we turned in our chips when he finished. Taking that into account, my time should be roughly similiar to practice (11:26).

I guess I know for next year, eh?

The next day when they published the times on the website, I have no idea what happened as the times for Harley and I were completely wrong while Matt's was the same. I started before Harley and finished before him but my time reflected I was the slowest on our 3 person team with a time of 20 minutes!

Oh well! The time did not matter and was not the focus anyway. The whole point was to support a good cause while having fun doing it. Secondly, the physical exertion was a reminder of how our brief 15-20 minutes of exhaustion, pales in comparision to the hours, days, months, and even years of suffering cancer patients endure while waiting for a remission and cure. While we recieved instant gratification and satisfaction within minutes, patients spend 100+ minutes of time waiting for theirs (and for some, it never happens).

As the three of us put our all into climbing the 1311 stairs of the tower and gasping for air, we reflected on how easy the task really was and how soon it would be over. While I have "been there and done that" as a former blood cancer patient, it was an "epiphany" moment for Harley and Matt....one that was very reflective, empowering, meaningful and will forever leave a mark on their lives. For me, it served as a reminder of what I have been through, my perseverence, what my grandfather endured in his final years battling myeloma, what friends with blood cancer still fight, and not to give up as life is worth fighting for.