Saturday I was blessed with gorgeous weather for my long run. Next weekend will be my final long run before the half marathon on June 26th. It was about the 3rd or 4th time I tried out my NF endurance outfit (tank style running top with a blue running skort matching the words "NF Endurance" on my neon yellow jersey). The weather was HOT - 85 degrees with barely a cloud in the deep blue sky. Although it sounds like the most ideal of conditions, such bright days enhance my vision impairment making my visual perception more distorted and double vision more intense. As a result, I had to look mostly at the ground in front of me. With my difficulty seeing and the long grass on the side of the trail, I completely missed one of the mileage markers and ran a mile and a half further than I was supposed to (10.5 miles instead of 9). In addition, I am not at my best in hot weather. Although my attire kept me pretty comfortable and the occassional tree shaded areas gave some relief from the hot sun, halfway through the run my feet began to feel like they were on fire. They ached and were sore but I kept pushing through the 10.5 miles thinking of my how feet pale in comparison to the trials my NF heros have endured.

Less than 2 weeks now and I will run my 2nd half marathon to inspire, and raise awareness and research funding for NF. Here are a few more stories about my NF heros that I run for: 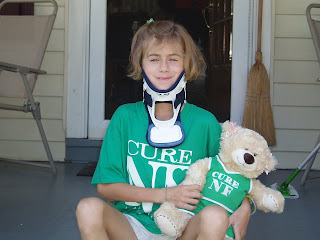 Leah was officially diagnosed with NF2 in July 2007 after a 7 month odyssey. At 10 years old she has already endured 3 major surgeries and 3 minor. She had a lesion removed from her chest and scalp in January 2007 that were incorrectly determined to be neurofibromas. So her parents spent the next 7 months preparing her for a life living with NF1. It wasn't until a MRI scan showed a huge cervical tumor and the negative NF1 bloodwork that their local neurosurgeon said she may have the rarer form of NF known as NF2. The week the blood work came back confirming the NF2 diagonsis, the pathologists at Boston informed Leah's parents that the neurofibromas from January were instead schwannomas, confirming the that Leah had NF2.
Leah had the cervical tumor removed in Dec 2008. Normally, this type of tumor lies dormant for many years but Leah's started growing and compressing her spinal cord. At the same time, another typically slow growing brain tumor known as a meningioma had grown significantly and needed to be removed in order to prevent detrimental damage. Doctors operated on the cervical tumor in her neck first with the hope of going back in a few months to remove the meningioma brain tumor. As Leah's parents prepared her for another surgery on the meningioma tumor in June of 2009, they found out that her cervical spine had collapsed. A somewhat emergent surgery known as both posterior and anterior cervical fusion was performed in early August 2009. Because of this surgery, Leah had to wear a jr cervical collar for 6 months (August 2009 to January of this year). During the time she had to wear the collar, the brain tumor kept growing causing headaches. Unfortunately, due to its critical location near the motor cortex surgeons did not want to wait until she no longer had to wear the cervical collar to operate. Thus, Leah had her first brain surgery in November 2009. Because of the complicated nature of NF2 tumors often fused to important structures in the brain, surgeons were unable to remove the entire tumor meaning it is a high probability it will regrow requiring further surgery.
In addition to the spinal surgeries, brain surgery, and removal of the schwannomas, she also had a lip lesion removed in December of 2007. Her parents have decided to chase the cosmetic lesions that bother her. Athough she has others on her body her mom says that at the age of 10, Leah is just more concerned about being a kid.

Leah is also a fellow participant with JT, Oliva, and I at the National Institute of Health where researchers are trying to understand the growth mechanisms of NF2 tumors in order to determine a pathway to treat them with theraputics. 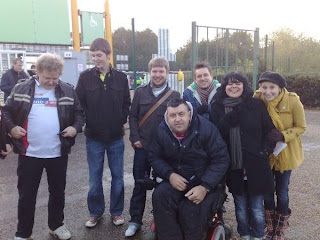 My name is Jeffrey Keith Bristow and I live in the UK. I am 41 and single. Although I am in a wheelchair, I live on my own and I do everything for myself. I like it that way and its good to cook or go to to bed when I like. My parents were told when I was 4 years old that I had NF1. Over the years I have had many tumors removed and many problems to deal with. In my early 30s I started to have problems in walking due to a large tumor at the back of my knee. The doctors did a test and discovered the tumor to be a high grade sarcoma cancer. I had to have my leg amputated well above the knee. So I had problems with a prosthetic leg. 3 years after losing my leg I found out I had thyroid cancer in my throat. I have now been in remission for 3 years. All is fine but I still have to go for tests yearly for both my right leg and also my thyroid cancer. So far all is well.
Although Jeff lives with chronic pain like many other patients with NF1, he spends his time helping cancer patients and volunteering with the local hospice program.
Posted by Rebecca at 11:50 AM