Arriving in a Foreign Land 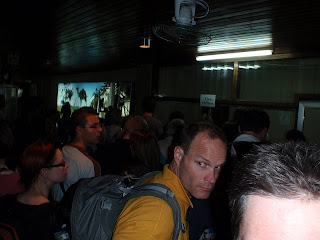 The first picture of Kili teammate Eric at the Kilimanjaro Airport 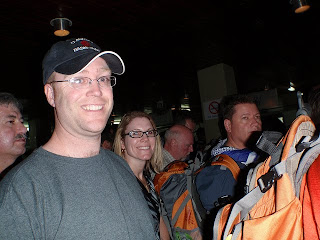 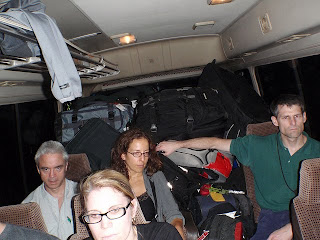 everyone looking pretty exhausted and ready to finally arrive the hotel for food, shower and sleep (Shane, Pedro, Merrie, and Jason)


After over a day of travel on 2 long international flights, we finally arrived the small Kilimajaro airport in Africa. Now think of US airports being huge, having several gates, many restaurants, clean with nice seats at each gate to sit in while waiting, often a fancy and tasteful decor, and a very structured/orderly customs processing area. This is definitely what this small airport is NOT.

When we arrived it was hot and non airconditioned. Notice the simple but old fan adhered to the ceiling above Eric's head with flourescent bulbs without covers. Next you will notice it that it does not appear people are really in an organized line. As a matter of fact there was really no organization to getting through customs and just a harry mob of tired sweaty travelers pushing and shoving their way to one small window where african men seemed to picking out people as if bouncers at a club. The airport definitely had no decor
as you can see from the photos except for a few advertisement banners. Other than that, things were VERY simple and not particularly a place of a clean or sterile environment. At least there were toilets in the bathrooms as opposed to holes in the ground which we would encounter in many places later.

Being deaf, it was critical for me to not loose my group in this crowd and to stick like glue next to Harley who would communicate for me and sign. I had a rolling carry-on bag with me as well as carrying a second bag on over my shoulder to manage within the mass of people persistent upon getting to the front all while I had to tackle with imbalance. A very rude group of international travelers with maroon passports seemed to have no patience or regard for anyone else and kept attempting to cut in front of people or would not give me any space and push from behind. I finally became fed up with one man who kept trying to get in between Harley and I so that I would become lost within the sea of people. Finally I spoke up and told the man that I was deaf so I NEEDED to stay with my group to not get lost. I further indicated that my husband was in front of me and had to communicate for me. Then the guy sort of backed off. Geez louise! Where were these people from? Whatever country, that is certainly not the place for me to be!

We stuck next to our guide Tim who handled things for us (appeared to be bribing and we each had to pay the men). Within the crowd we seperated from Merrie and Pedro and waited for them in the baggage claim. For some reason, the men in charge of granting people through customs were skeptical of Pedro's passport. They had some issue before they let them through.

All together once again, we met some more african men who guided as through the darkness to our van type vehicle where they efficiently tossed our bags up through a window to another man catching them to stack in the back. We were greeted with a glass of champagne and a little bouquet of 3 red roses. More what looked like negotiating was going on through Tim with Harley was over there too. Meanwhile, another african man who did some luggage loading tried talking to me. I think he wanted money but there was absolutely no way for me to understand him (especially in the dark! LOL). We stood there and he kept smiling at me. I told him I was deaf and could not hear him so he needed to communicate to my husband. Oddly, he then kissed me on the cheek, smiled again, and stood there waiting. Apparently but unknown to me at the time, he did not speak my language so he had no idea what I was saying either. He was expecting a tip from ME so he was doing everything he could think of to appeal to me for money of which I had none.

After all the luggage was loaded up and tipping taken care of, we piled into the vehicle with our luggage crammed to the ceiling behind us. The ride was then another 45 minutes before we arrived the hotel. As I looked out into the blackness of the night, I wondered if there were any lions or tigers out there wandering aside the road. My daydreaming was interupted from the lights of an approaching vehicle. At first I slightly panicked that our driver was going to collide head on with with the oncoming car because he was driving on the wrong side of the road! Then it passed us in the opposite lane and it really dawned to me that we were now in a foreign land much unlike our own.
Posted by Rebecca at 11:39 AM