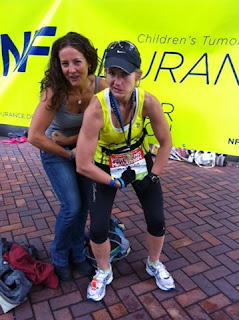 my trainer Merrie and I after I finished the Portland marathon for the NF Endurance team flexing our "Gold's Gym strength" in front of the Children's Tumor banner
Well yesterday marked 1 month since my full marathon success! Yes! I really did run a full marathon less than 5 months after a 5 hour brain surgery and completed the event in just under 5 hours!!!! I did it!!

And as a reward.....the purple calloused skin and blackened nail of my second big toe fell off while I was in the pool for aerobics! haha (little inside joke - a fellow athlete friend commented once "toenails are for sissies!") LOL We aren't kidding! 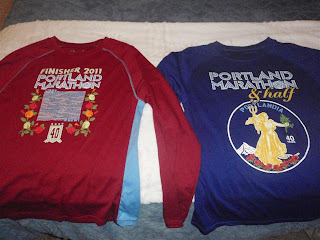 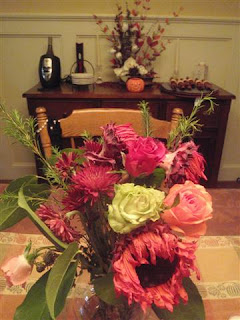 I proved I hope what to be a very valid point.....You work hard, put your heart into something, exercise dedication and determination, and hold strong in your faith, MIRACLES CAN AND DO HAPPEN! If you tell yourself that you CAN'T do something you know what? You are right! Because you do not BELIEVE.

I could not have imagined running a marathon when I was well, before I lost my balance function and had perfect vision. I did not think it was possible and DEFINITELY would not have believed back then that someone could accomplish such a feat so soon after a brain surgery, having never ran a marathon before! YOU ARE STONGER THAN YOU THINK! Generally it does not come out until you are really put to the test.

How did it feel and how did it go for me?

Hmmn.....well actually now it is kind of a blur. Contribute that feeling to coming back and getting into constant things already which have included a giant grand finale hike, another charity endeavor, holiday fun, yet another charity event I am planning for, and coordinating a team. I am constant activity! But from what I can remember, it was my pretty ideal running climate allowing me to wear nothing but a pair of running capris and stripping down to the running singlet you see me wearing in the photo above. 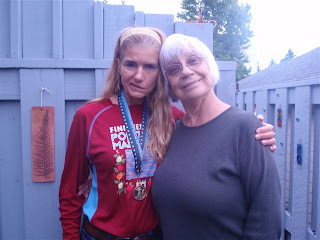 First time running a full marathon in the fall I was unsure of my clothing layers. So I started with 2 long sleeve shirts and a thin pair of gloves that I ended up discarding within the first 2 miles to team support on the sidelines.

It is a GREAT feeling to start out an event with a team and additionally have someone with you to begin the race. Lucky for me I was able to begin the marathon with our wonderful team captain Janet who was running this event for the I think the 3rd year shooting for her best time. We stayed with each other at least for the first mile until I of course had to make my traditional port-o-potty stop. After the first few miles (you are kind of excited running in the pack), I aim to get in "the zone" and try to remember my pacing.

It was a real THRILL to spot volunteers with the Children's Tumor Foundation wearing neon yellow shirts and cheering me on from the sidelines. What a motivating boost! My family and husband were included in that group and also offered special energy nourishment I could not carry. I saw my sister ALL over the course which was pretty exciting too! I cannot even recall how many times I saw her.

Unlike running around a track which quickly grows dull, when you run in a marathon you get to sight see lots of the city and area in a way you could not by taking a car or bus and covering ground too far for walking. That definitely makes it quite interesting and gives one of feeling of exclusitivity.

When it starts to get tiring, it is a good incentive to keep pushing. Our big hill was such an example. Hills are not my forte so it is a great deal of mind over matter. While I was running and focusing on just making it to the stoplight in the distance which appeared to be the top, I saw a sign about needing an event number to cross the bridge. "BRIDGE?", I wondered with curiosity. Then a few moments later one of the most beautiful older bridges I have admired on every visit to Oregon came into view. My heart thumped with anticipation when I realized I would have the special opportunity to run across it admiring the intricate detail of it minty green medal and the expansive scenery of the Willamette River. As my eagerness built, my footsteps quickened driving me up the hill. 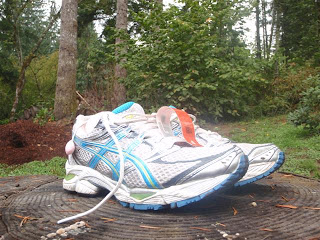 The weather was in the high 50s and started out as overcast (actually better for my vision) then began to drizzle sometime between mile 8 and 9. By then the light rain is pretty refreshing but would not be too cool if it was at the start.

I think the most difficult were miles 20 or 21 to the end. I had planned according to the event maps to have energy gels provided for us on the course. So I only brought myself 2 gels to carry in my hip belt and expected to grab 2 or 3 more at designated mileage posts as I needed. (Groan) There was an interpretation error. Whatever happened, the gel stations were not there! The only food energy were gummy bears and pretzels which I am unable to swallow while running. I tried the gummy bears at mile 7 because I could not see what the guy was handing me. I thought it was an energy gel as it was the same area it was SUPPOSED to be provided according to the map. Geez! I nearly choked on them and never did manage to swallow any. It was getting so exhausting to breathe while trying to chew them that I had to reach my finger into my mouth to pull out the ones stuck to my teeth. Blah! That was not a good experience and kind of strange. So going by the guidelines that you should have energy replacement every hour, I was definitely coming up short by the time I reached mile 20. I tried to extend my gas tank as long as possible by pouring sport drink down my throat at several of the stations and downing a can of FRS drink my husband brought me at mile 11. That way I could eat the second gel at mile 18 hopefully.

By 20 my mind was toying with me. Somewhere between 11 and 12 when I saw my husband, I told him I was going to need the extra gel I had in my backpack. Unfortunately because I was over optimistic in the course provisions, I forgot I left the extra gel at home!!!! I did not realize this until after the marathon. So while I was running, I had banked on my husband bringing an extra gel for me later in the course (certain stretches were closed to spectators).

When I reached 20, he and my mom weren't there! So the exhaustion and my mind were really playing me at that point. It had been a long time of just running alone without seeing someone I knew. Then I fretted that I would not see them and get the energy needed to make it to the end. When I finally saw them after mile 22, I was ready to suck down that gel BADLY! I almost cried and started screaming when he told me he could not find it. FORRUNATELY I was able to improvise just as I had in DC when I had to make do with whatever was available. I had bought one of those "stay awake" type of energy shots to have before the race which came in a 2 pack so I had one left over in my bag. Desperately I slammed it down and prayed I would not have a dang heart attack on my way to the finish. I only ever drank one once before on a long run and was not certain how safe it would be to my body to drink a 2nd.

When I did approach the finish I was pretty exhausted and must have looked like it too as 2 medic volunteers immediately grabbed me and supported me by the shoulders from each side. I was sort of dizzy so they had me drink 2 boxes of orange juice and stayed with me until they were finished and I assured them that I would be ok. 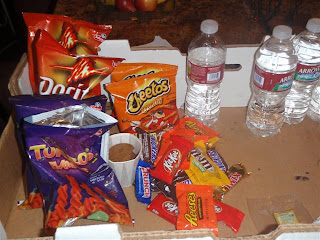 my loot after I had eaten a banana, cheese, and pizza 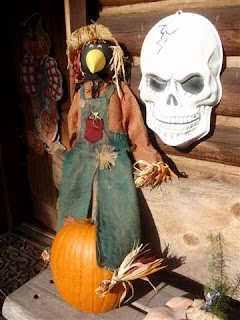 
Wow! Were my legs stiff and sore!!!! I think after I drank some water I had to sit down CAREFULLY and stretch for at least a good 15 minutes. Maybe it was longer before I could finally stand up to walk around. In addition to the gold medal draped around my neck after crossing the finish line, the minature congratulatory roses, and my commenmorative seedling trees, there was LOTS of food booty to snatch up in the recovery area. So I brought myself to my feet and scoped out a spare box thrownout to carry all my loot. 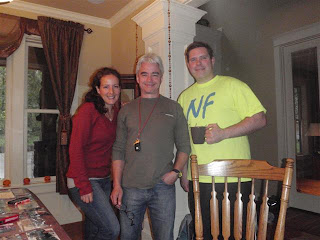 After emerging finally from collecting a good stash of food, I met my family, Merrie and Pedro, and friend Jean to snap some photos in front of the team banner. When ready to hobble to the car, Merrie and Pedro joined us back at my parents in Scappoose for a 40th congratulatory celebration when they also played the ingenious picture game and we finally enjoyed that ice cream cake I made my dad wait for! :) 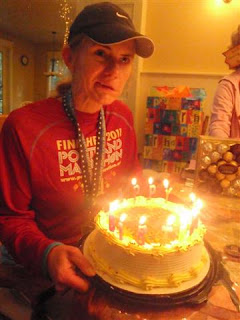 Ok, So I am not looking so great. Give me a break I just finished running a marathon! 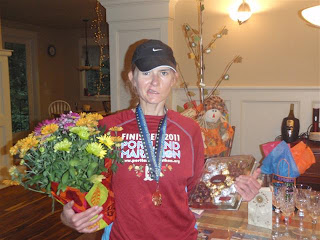 Congratulations on your first "sub 5 hours" marathon! Not only resveratrol but also Bio 30 would increase your stamina (endurance), because both block the oncogenic kinase PAK1, and activate the tumor suppressive kinase AMPK, and eventually extend your lifespan!

Hi Rebecca, congratulations on your success and strength! My brother has NF2 with chronic sciatic pain, and I stumbled upon your site from internet research. You validate that an active lifestyle is achievable and inspirational to others, best wishes to you.

Hi Rebecca!
My mother suffers from NF2 so I decided to base my Health exam on NF2. You're blog has helped me a ton, and just all around inspired me! You have made me hopeful. Keep doing what you're doing you're such a stunning person.