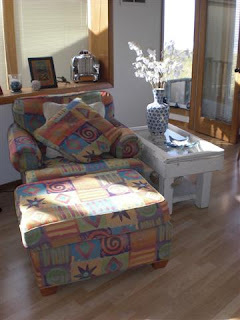 After months of physically training, living life to the fullest, and getting as much done around the home as possible the weeks prior, it was time to mentally prepare for the surgery. I find no better place to do this than the beach on the Oregon coast where I have been visiting since 2003.
My sister's boyfriend's parents have a home right on the beach which they have graciously opened to us for us to stay at before both my surgeries as well as getaways over the past 3 years. We have been many places in the US as well as the world and this ties with Sedona, Arizona as my favorite place of relaxation and regrouping.
I cannot say either is better because they are completely different environments each with their own special uniqueness. I will say though that the sea just really is in my bones and hypnotically puts me at peace. It is the same effect portrayed by the character Kevin Costner plays in "Message in a Bottle", Diane Keaton in "As Good As it Gets", and most especially the characters in the movie "Nights in Rodante". The sea is my love and it is there that we both can relax, reflect, talk, and regroup. Something about the ocean and shore has that kind of power. Thus, it is the perfect place for us to be before something so emotionally shaking and potentially life altering.
Before my first surgery, I think we felt a deep sadness and fear. There is of course always a little sadness and fear, but while we were at the beach this time we focused on forging ahead and keeping it productive. Being at the beach was our opportunity to get in the "right" frame of mind to endure what lie ahead. For me this is especially important because I really believe that attitude IS everything. The doctors and God can only do so much but I really gotta put in some effort too. I won't lie and I do not mean to scare those of you who have not gone through it but it is tough going through a surgery emotionally and physically. You gotta have a place of peace in your mind to retreat when it gets difficult and a positive will.
On the first afternoon at the beach, I took a run alone out of town. I was not really sure where I was going, how far, or how long I would be gone for. I just went out and ran with no watch and nor set distance contricting my mind to mileage or time. It was beautiful to be so free! I just started running, over a bridge to a slough, ran to town, ran out of town, ran over another bridge crossing a different part of the slough, ran through the fishing village, and found myself running down a country road where I had never been. I pondered where I would go and how far I would run down this road. With the direction I was heading, it most likely would eventually meet the beach again. So I continued running until the road came to a T at a sandy cliff overlooking the ocean and dotted with scraggly bushes and trees.
I scrambled down a rocky sandy gully trying to find a way down to the beach. When I reached the bottom it stretched out to a sandy embankment which seemed too high and too ruggedly dangerous for me to climb down in order to reach the sea. So I sat on the cliff admiring the ocean waves and the fluffy clouds overhead as a gentle breeze brushed past my hair and gently caressed my arms. The warm sun enveloped around me and I felt surrounded by love instead of impending doom. The feeling was exactly what I had been in search of. I did not want to leave. I wanted to capture the feeling, bottle it up, and take it with me so I could unleash it whenever fear, anxiety, sadness, or anger appeared.
After a long while of savoring as much of the moment as possible, I was getting a little chilled which was my message and reminder that it was time to go. Happily I stood up filled with satisfaction and hope. I felt I had achieved and found that calming place I had been seeking. I crawled back up the hill to the T in the road. The sign along the road heading south down the coast read 3 miles to Pacific City. To continue my exploration, I chose to head down this new route.
Shortly after the sign I came across a cross walk leading into a forested area along the shore. Curious if it led down to the beach, I chose to follow the pine needle path. Sure enough it led to the shore dotted with black lava rock and sandstone that I went to investigate. Then I ran 3 miles along the spansive stretch of beach until I met cape Kiwanda and the giant sand dune our traditionally climb.
This time however, I trudged gradually up the back side and then rested at the top to stretch out and then sit and admire the view. For a time, I had the whole dune completely to myself and was the dominant figure atop the huge mound. Eventually a family and their dog and 2 teens joined me which was my cue that it was time to head down and back to the beach house.
More pictures from the beach......Here.

THANK YOU CHRISTIE AND DAVE FOR PROVIDING SUCH A MARVELOUS RETREAT FOR US!
Posted by Rebecca at 3:43 AM