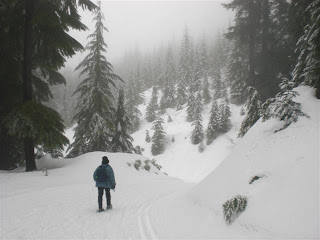 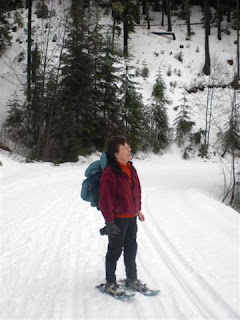 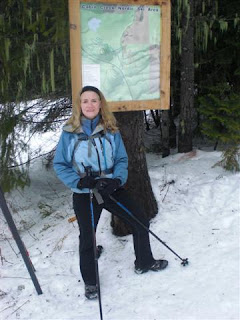 A week ago Sunday, TSNW hiking friend Sandy and I went up into the mountains in search of a snowy enough trail to play in. My plan was to snowshoe while Sandy intended to cross country ski on the groomed tracks at Cabin Creek SnoPark (a few exits east of Snoqualmie Ski Hill which is at the top of the pass). However, the silly pair we are, both of us forgot our boots! (Sandy her ski boots, and I my waterproof hiking boots I use with the snowshoes)

Well not all was at a loss. There was been such a reduced amount of snowfall this year that the trail was well groomed and compact. I estimated that we could even easily walk on the trail actually going for a "hike" in the snow.

Sandy was already wearing hiking boots and I had my semi-waterproof trail running shoes on (Salomon). So I suggested we share the snowshoes and go for a hike in the snow. I had brought my downhill ski poles which I now use for stability when snowshoeing. Wanting to give Sandy the opportunity to try out my AWESOME snowshoes which you cannot rent, I offered to let her use them while I walked with my poles. With the hard compact trail and the poles, I was confident my balance would not be an issue as well as my shoes sufficient for the activity.

The result worked out wonderfully! It was no problem for me to walk in the snow and I greatly enjoyed it. My shoes worked very well and my feet stay rather comfortable and only became slightly damp after our jaunt.

As we got further out, the snow on the trail was last compact and a little deeper causing me to slight sink an inch. I wish I had remembered to bring my yak traks to try out (a new product sold at REI and running stores which are essentially traction chains to strap on shoes for snow and ice). But alas I had not thought about it when preparing to go and I managed with the poles. On the way back we switched and I used the snowshoes while Sandy hiked.

Click on the link to see a photo documentary of our journey.

Cabin Creek Adventure
Posted by Rebecca at 10:32 AM