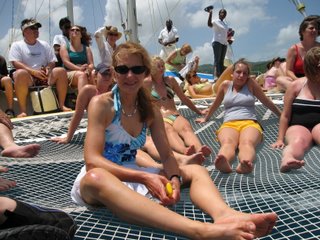 Photo taken by Harley Dufek in Ochos Rios, Jamaica on June 27, 2006 aboard the "Sinara" Trimaran.

Check out that right knee (the one closest to you in the picture). Actually it does not look too serious of an infliction in the photo but it ended up being pretty bad.

Seeing as our mission was to snorkel the whole time ashore in our first port of call in Labadee Haiti, I did not bring my walking stick with me. For one I did not want anyone to steal it while I was in the water, and secondly I did not imagine I would need it.

After an hour or more of snorkeling we decided we better take advantage of the free lunch provided at the island bbq as it would be awhile until dinner. In our hurry to be the last ones to grab some food before they shut it down, I tripped walking over the lumpy yet hard sand dirt road. Unfortunately the sand was rather abrasive due to its makeup of fine coral particles. Therefore it left my knee an awfully bloody mess.

What was even worse is that this happened in front of duck boat (busload) of people. Being on vacation I am sure they thought I was some fleusy who had a little too much rum! LOL I arrived at the bbq with blood dripping down my leg and had to get a cold glass of ice water and a napkin to clean it up (the ice water is safe in that spot as the area is owned by the ship and all the food and water is provided by the ship).

When I fell I did not imagine it would be such a nasty wound. Each time I went snorkeling it got worse and a big ugly scab formed with a rash around it when I returned home. It is gone now but a definite pink scar the size of a quarter is in its place to match all the bruises on my body.

Falling injuries are quite common on a daily basis but often I forget about them unless they are more serious such as when I fell on my tailbone down the stairs and falling on something abrasive such as coral sand. Bruises will show up on my body that I cannot account for as I get used to bumping into objects and falling as a normal part of life now.

My lastest falls (close calls) yet not as serious include: falling like a tree on top of our luggage behind the antique wood frame couch in our hotel room (I bruised and scraped my armpit area), slipping down the stairs again last Sunday trying to hurry to my swimming class (fortunately I did not reinjure in tailbone but formed a large bruise and scrape on my forearm), falling yesterday on a pile of tools (including some kind of small router saw that was fortunately turned the opposite direction) in the spare bedroom filled with things we have no place for, and today I did something on the stairs that hurt momentarily. I know I will have a bruise on my shin as I whacked it hard going up the stairs. The rest of the details and my other bruise incidents have left my memory.
Posted by Rebecca at 11:43 AM