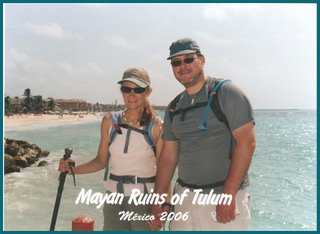 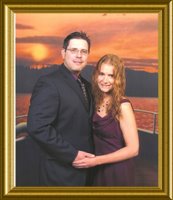 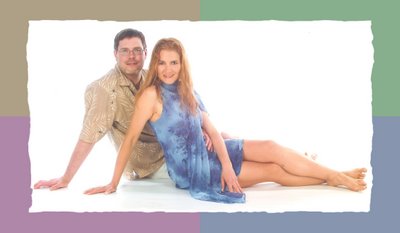 When we were married we made a decision to travel every year as that is one of the things that we like to do and is really important to us. This year for the first time we went on a cruise with friends. They had invited us almost a year ago and I was a little hesitant to make plans so far in advance given the situation. In my mind I wondered if the trip could be sold if something happened to me, if someone could accompany Harley in my place, or if he would even go if I was not here or could not go with him.

Well I made it to the trip and we had a fabulous time! I will include more photos when we get them from our friends. It was the first time I have been swimming in the ocean since treatment. We went snorkeling in Labadee Haiti, Ochos Rios Jamaica, and Grand Cayman. I literally did not want to get out of the water!!!

We never had an engagement photo taken of us. On the boat they took SEVERAL photos of us. The one with the sunset is from the first formal dinner night. The one on the right is from when we just got off the ferry in Playa Del Carmen, Mexico to visit the Mayan Ruins. The center photo we purposely had taken. They had a free photo sitting on casual night and we thought "What the hay! Let's try it out!" Unlike the other pictures, the photographer for this last sitting takes a little bit more time and sets you up into a pose. There were a couple shots of us and this was our favorite. Thus this is our anniversary photo to make up for the engagement photo we never had.
Posted by Rebecca at 9:38 AM

How was the Mayan ruins? I'm a BIG history/archaology buff.

Oh, and if Harley grew a beard, he'd look like my younger brother. :)

The ruins were cool but the smallest that we have seen. We have been to the mayan ruins of Tikal in Guatemala and also the Aztec ruins outside of Mexico City.

When we visited those places I had good balance and we climbed the tallest ruins there. At these ruins south of Playa Del Carmen the ruins were small and you could not climb them. That was ok because I would not be able to climb them now and I was watching interpreters traslate to me what the guide was saying.

It was a cool addition to our trek of ruins. You would like our mask collection. We get at least one from each place and we picked up two very unique ones in Cozumel that we have not seen anywhere else! They are carved out of some black stone with turquois inlaid in them.

It was interesting having interpreters otherwise I would have been really lost! I was surprised to learn that other culture besides just the mayans lived there and a wall was built within the city to seperate them. The mayan ruins in the jungle of Guatemala were different and that may be a major reason.

HEHE. Harley does have a beard but he keep it trimmed short. I can email you a photo of him with a longer beard and needing a haircut!

I've *really* got to get back fluent in ASL. I'm in that "foggy area" where it's difficult to hear people talk, and having an interpretor isn't any help, as I have a VERY hard time reading other's signing.

When we're in a restaurant, I have given up trying to understand the waiter and just get Sally to repeat what he/she said. I'm familar enough with Sally's voice that I can make out what she's saying better than I can with a stranger.

thanks for the history lesson, and I bet that mask looks awesome!