Evolution of a Face - 2 year journey through facial paralysis 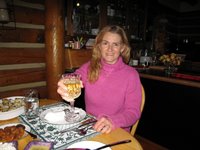 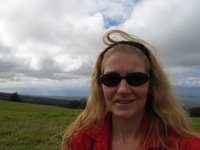 Photo on left: self portrait taken in the upcountry of Maui in January 2007.

Photo on right: Valentine's dinner cheers taken by my husband Harley on February 14, 2007.

The photo on the top is the night I was hit with the onset of facial paralysis exactly 6 months after cyberknife radiosurgery for the right side vestibular schwannoma (brain tumor: AKA an acoustic neuroma in an NF2 patient......NOT an AN patient....the difficulty in treating the tumors are different between the two kinds of patients).

The reason I experiened facial paralysis months after treatment is that the tumor swelled (for a period of 10-11 months) and hence pressed on the facial nerve as well as my vestibular and optic nerves.

In the photo my face is swelled up to its maximum (so much so that it hurt) from the steroids. In addition, if you look closely you will see that I have lots of acne in that photo. It is a common side effect of the steroid Decadron which I had been taking to reduce the swelling and combat some of the side effects of the swelling tumor (dizziness, vertigo, vomiting, etc.).

The other two photos are more recent pictures of me taken in 2007 where you can see some changes. Although it does not occur for everyone, the facial nerve in some cases (if not severed through surgery) does have the ability to regenerate very slowly. It appears that I may have been one of those lucky ones for the time being. However, I have not achieved 100% function of my face back. (Truth be told I kind of picked some good photos to show you).

In January/February of 2005 a facial nerve test performed on me revealed that I lost 50% of my facial function on the treated side. The paralysis not only discouraged/depressed me in the department of my vanity but it also caused eating, drinking, swallowing, dental and chewing problems from numbness on that side and decreased saliva production, loss of tear production, problems with simple facial movements (I still cannot blow up a balloon!), and problems with my eye on that side as the eye lid does not fully seal while sleeping. Shortly after the paralysis I had to become adjusted to this weakness and scratched my cornea as I did not have the strength to close my eye lid tightly to protect the eye. As soon as the scratch had healed I nearly scratched it again while rinsing my face after using facial soap that contained cleansing beads.

During this time was a very low point for me and the only reason I have the photo above is that I wanted to show the medical staff where I was treated in California what happened. I tried very hard for a solid year to avoid having my photograph taken and releasing them. I have more that I finally feel brave enough now to post. I need to find where they are all stored on the computer and file them into flicker.

The first time I saw the original facial paralysis photos from December 2004 is when I was in Arizona in October 2005. They were on my husband's laptop and we saw/found them while uploading some of our travel photos to see. It was a horid emotional shock for me as I did not recognize myself. To me I appeared a monster and it reminded me of the difficulties I had been through unexpectedly over the last year. I nearly broke down in hysterics but at the time I was able to get a grip.

Although my face has not been restored to what it was before treatment, for the most part I am comfortable with its present state and enjoy it while I can. I know that everything is fragile. You never know when your blessings and luck are going to turn. Since a month or two before the marathon, I have been experiencing small bouts of my face "locking up" on me. This happens if I am tired, have not had enough sleep, am stressed, and sometimes it seems for no reason. The face will twitch and freeze into a pose for seconds to a minute like a bad botox nightmare. I get anxious when this happens and start contorting my jaw around and massaging my face in deperation for it to unlock. It eventually returns and I think "Phew! Luck was on my side this time but what about next time?" LOL Ok I will be honest...sometimes I am pleading "God please don't let it happen again. Please let me keep my face. "

Anyhow, I wanted to post this topic and the photo on December 14th of 2006 but wouldn't you know we had a storm that day and lost power for 8 days. Recently the topic of facial paralysis has come up again within the NF2 community as almost ALL of us have it.

The question posed was whether facial nerve stimulation helps? Anyone try that? You do not have to have NF2 to share your wealth of knowledge. I am willing to learn whatever anyone knows about it. If you don't know but would like to research it for me, THAT WOULD BE MOST WELCOME AND WONDERFUL!! (hint, hint). :o)

Of particular interest to myself, I am very interested to know of what anti-wrinkle or wrinkle correcting products have worked for you if you have tried them. After my face shrank post steroid use and I lost some weight, my face has become wrinkly as it was very stretched out. I was hoping that it could bounce back but alas I am in my mid-30s now and time is persistant on continuing to weather my face.
Posted by Rebecca at 10:19 PM No comments: