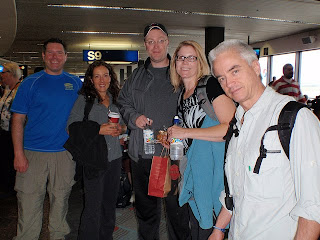 Left to right at the Amsterdam gate to Tanzania: Harley, Merrie, Chris, Shane, and Pedro 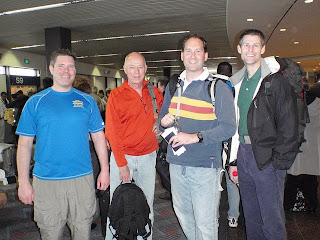 Left to right: Harley, Dave, our guide Tim, and Jason (Ron and Eric are missing and must be grabbing a coffee or something; Patrick met up with us in Africa) 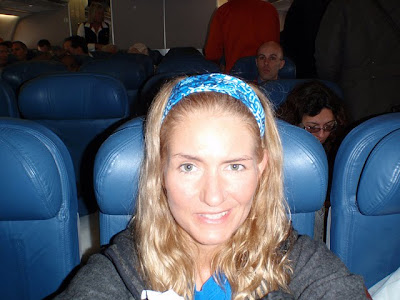 We are roughtly at 31,000 feet and flying over some fantastic mountain peaks I can see from the plane window. It appears we are still flying over Europe so I assume those are the Alps I could love to visit again someday.

The flights are going well for the team. We are now on our 2nd flight from Amsterdam to Tanzania. Our first flight was out of Seattle at 1 pm to Amsterdam and was roughly 9.5 hours. Harley took some ambien and passed out on me! Chris got a picture. Shane and Chris stayed up with plans to be read to sleep when we reach the hotel in Tanzania where it will be night time. Ron and Tim were sleeping when we did a pass by. Pedro slept a little bit and Merrie and I slept for a short time. I think she and I are slightly wired from consuming our beloved chocolate!

I started out sick at the beginning of the flight after taking the malaria medication. I think perhaps I did not have enough substance in my stomach and it reacted with my stomach acids. After eating some chicken meal I felt better.

Flying internationally is pretty cool because they still give you a blanket and pillow as well as a free drink (and FOOD!!!). So I had a wonderful glass of white wine on the first flight over and a miniature bottle of white sauvinghon blanc-chardonay mix from Chili on the second flight. (I remember reading on the second flight about how they feature certain wines from different parts of the world on the flight out of Amsterdam). Harley had a red wine and coke which Merrie told us is a very popular drink in Columbia where Pedro is originally from.

I am more excited how that the team is together and we are underway. Prior to our depature I have been very focused on training, trying out gear, and anxious over the remaining fundraising left to do.

Dana Milkie, the VP of Gold's Gym NW, through us a lovely send off party which was an excellent way to unwind before we left as well as a distraction from trip anxiety. I know how physically and mentally challenging this climb will be for me.

The day before we left I further got into de-stress mode by getting a fantastic massage from Koko at the gym spa, going tanning to get in some Vitamin D treatment, and taking the dogs for a walk to Lake Sammamish.
Posted by Rebecca at 8:36 AM 1 comment: 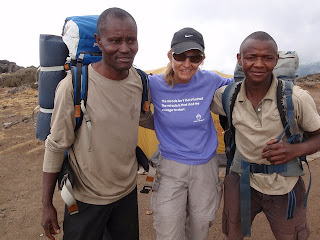 I am pictured here with Afrian guides Freddie and Gabriel who were my "angels" instumental in getting me up the mountain which you will see in video to come. 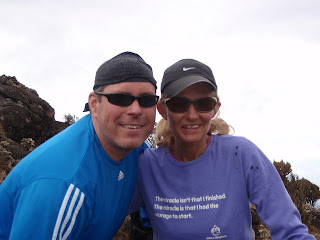 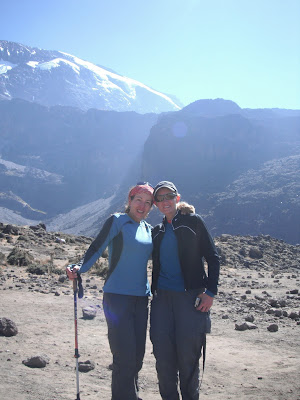 I'm back! It was a long flight home that took alot out of us. It has taken me a few days to just get readjusted to the 14 hour time difference and get over some VERY serious jet lag. Today is about recovery as last night I suffered chills and an excruitating headache which lasted from 3:30 am until the late morning.

Anyhow, to get back to training after days of sitting on my butt during travel, I went for a slow 4 mile run Monday night, followed by a mile walk and 2 mile run around the dog park to ease into it on Tuesday night, 1 hour with my trainer Merrie yesterday and a 6 mile run in 1 hour 1 minute following.

So what is the news you all have been waiting for?????

Did I reach the summit of Kili (Kilimanjaro)?

If you are a facebook reader you already know the answer. If not, I regret to inform you that I did not. I made it through 3 days of increasingly difficult terrain to an elevation higher than Mt. Rainier and then down to the 13000 ft camp next to Baranco Wall. I was ready to continue on the morning of day 4 but due to the extreme difficulty of the terrain ahead and lack of adequate time for me to safely desend 9500 feet after pushing a 4500 summit ascension, our guide made the very difficult decision to send me back down. It was very emotional for the team and many tears and hugs were shed. I plan to share with you per day my journal writings during the trek.

To be honest, it has taken me some time to get over it. Yesterday I recieved an affirmation that really put things into perspective for me. Putting aside from pride that was wounded, I must be proud of accomplishing the main objective and be very grateful that the Lord blessed us by keeping everyone on the team safe and free of harm. Above anything, the safety of my team was of the utmost importance. That is what I asked for and happily that is what I recieved. The night before I was sent down I did pray to summit but in the end I wanted everyone to be safe and told the Lord "Your will be done.". I trust in his decision. I believe now that it played out exactly as it was supposed to.

Let me share with you the light he answered me with yesterday morning:

In the interest with what I was trying to accomplish by doing this climb - to bring awareness to NF2 and how it affects people - it was actually best for me to not summit. I am extremely rare among the population of those affected by NF2 to even have the luxury of hiking let alone attempting Kilimanjaro. Yet, I felt moved in my heart that someone with NF2 had to attempt something great in order to show people NF2, make them aware of it, and make it real for them. Hence, I became driven to the task of giving my all on the only largest mountain in the world I could have a fighting chance of climbing. It has taken me 6 long years to work up to this point - lots of training and not giving up.

Before I could fully grasp the magnitude of what I was setting out to do, God guided me in making a movie to show the world. Through the movie, people will relive my struggle to overcome obstacles, accept disappointment, and seek ways to adapt to what has been taken away. My aim is to show the world NF2 but also to inspire and give hope. Making it look too easy if I had summitted would give the false impression of how NF2 really affects people. By seeing my struggles and the limitations NF2 has put on me, it will help you to understand the devastation of this disorder.

So about reaching the summit, it was not of importance when you look at the big picture and everything I have managed to gain and accomplish less than a year from major brain surgery on 4 tumors.

Can the hundreds of those with full physicaly acuity say the same?

Looking back, what have I done?

Walked a half marathon only 39 days post surgery in memory of a recently departed friend due to Leukemia and in support of NF2
Raced to top of the tallest tower in the city, leading a team in support of blood cancer
Ran my second half marathon nearly 10 minutes faster than my first all while raising money for NF research
Ran and hiked numerous miles with thousands of feet of elevation gain to train which is not a walk in the park with my vision and balance impairments
Motivated a team in support of NF2 to accompany me to Africa to climb Kilimanjaro

I may have not reached the summit but I climbed higher than Mt. Rainier and higher than most people will ever do in their lifetime.

So given that, I have lots to be very thankful for. I have had a miraculous year of recovery and I hope that I have given back by doing the absolute best I can in fullfilling the purpose God has intended me for.
Posted by Rebecca at 3:49 PM 1 comment:

Hello all!!! It has been a long time since my last post. I have been busy all summer training for the biggest challenge of my life yet which is to attempt a summit climb of Mt. Kilimanjaro in Africa - 19340 feet!

We have a great team of 10 climbers plus our guide with intentions to summit on 10-10-10. The mission is to inspire the world by overcoming the challenges NF2 presents me to follow my dreams and in by doing so bring awareness of the disorder Neurofibromatosis through the movie a Seattle producer is making of our adventure.

So here we are! It is really happening! It was on our honeymoon 10 years ago in October 2000 when I first conceived of such an endeavor with the intention to bring awareness of my disorder NF2 to which we nor family and friends had ever heard of. Back then I was quite normal aside from a little hearing loss. Now however, is quite a different story as my vestibular system is shot - meaning no balance and my vision impaired which I depend on for keeping my stability. Therefore, to be here now is incredibly meaningful.
It is miraculous actually and I will be the first NF2 patient - and perhaps first person living with brain tumors to attempt this.

OK. We climb tomorrow and have a gear meeting shortly that I need to prepare for. I'll try to write again later today before we leave on the trek for the next week.

Please keep the safety of the team in your prayers!
Posted by Rebecca at 6:02 AM 1 comment: