For a Special Lady 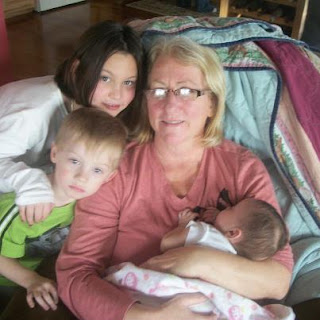 In memory of Wilhelmina Barron (with 3 of her now 4 grandkids) Two weeks following the marathon last October we did a tower race for the American Lung Association in honor of my beautiful aunt Willie. In mid-September she was diagnosed with lung cancer and given just a few short weeks to live unexpectedly. But with God's blessing she was able to defy the doctor's prediction and enjoyed just over 3 final glorious months of quality time with her family. This precious photo is one of the last taken of her with all her grandchildren which she carefully planned out to make into Christmas cards for family and friends. I get really emotional thinking of her love behind it as she passed away due to a brain hemorrhage on Christmas Eve. The chemo had failed so they were giving radiation a final attempt to beat the cancer which spread to her brain. Although hard on the family, this was the golden homecoming she had been waiting for over the last 20 years. In January 1991 (less than 2 years before my cancer diagnosis), her daughter (my 10 year old cousin) was overtaken by a very rare form of childhood cancer. I don't have kids (the human kind ;-)) but from what I have been told, it is the worst emotional pain to endure. How fitting to be reunited with her daughter and meet Jesus on such a significant day? Amazingly she had it all planned out. On Christmas day we received packages she had sent with meaningful and special gifts picked out for each of us. It was like she was right there standing next to us. At the moment of celebrating her the sun's ray shined through the house onto the centerpiece of white lilies decorating the dining room table. She was there comforting us and telling us things would be ok. I believe she was sending a message to let us know she was happy and was home finally. So how does this even relate to right now? Well in the midst of our training for Rainier, it is time once again to shift our training to include preparation for the next tower race which is in less than 3 months!! We will again be doing the Climb for Clean Air and dedicating the Gold's Gym team in memory of my lovely Aunt Willie who is now looking over the dogs and I when I am hiking and running. She was so proud of my marathon accomplishment and I know an important motivator for me to get through training despite leg pain from my last brain surgery and to finish the race! Thank you Aunt Willie! You will always be very loved! 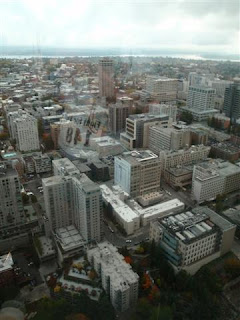