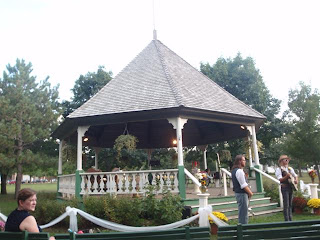 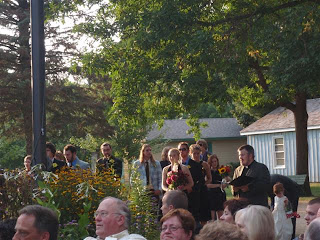 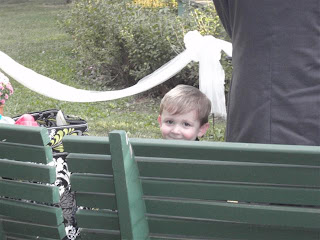 1st cousin Nate, Amelia's brother, peaking out from behind the bench in the front row 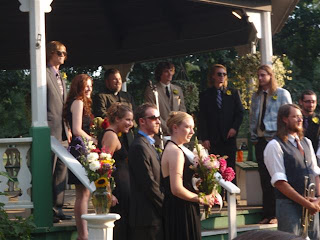 The groom, the bride's brother cousin Brice (far left with aviator sunglasses), and wedding party look upon with wonder as the bride approaches 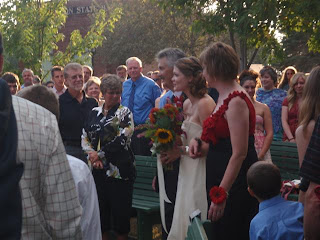 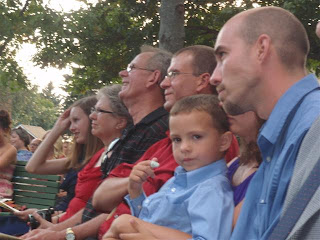 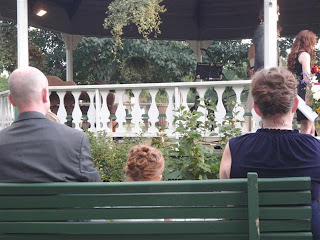 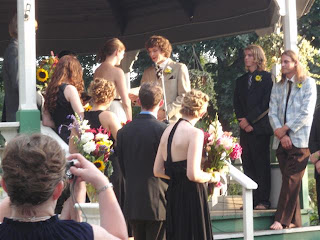 Mike utters promises of love to Courtnie the gushing bride 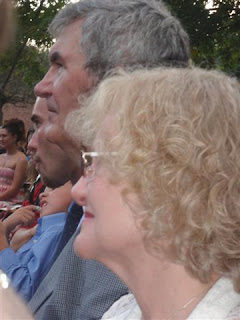 Mom and Dad gaze on in the joy of nostalgia 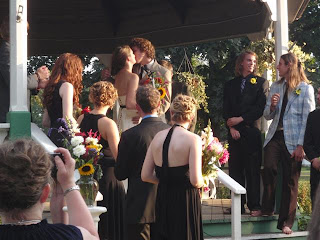 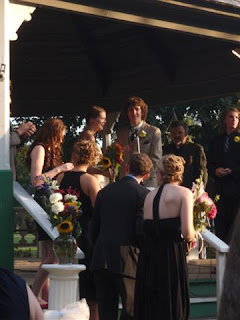 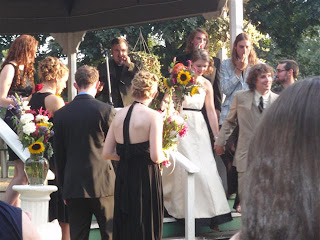 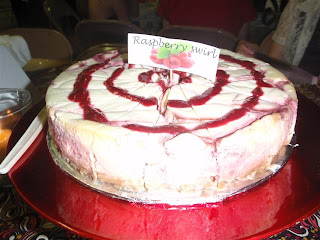 The best flavor cheesecake at our table - My kind of wedding! ;-) 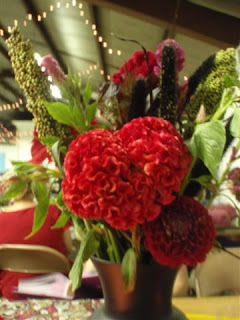 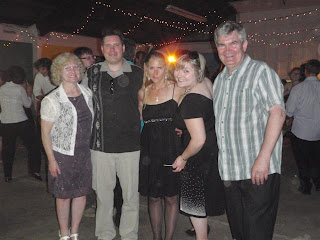 Our traveling clan - mom, Harley, me, Michelle, and dad
Posted by Rebecca at 5:22 PM 1 comment: 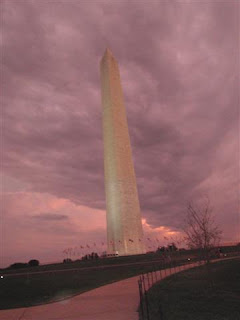 Thursday night before the storm 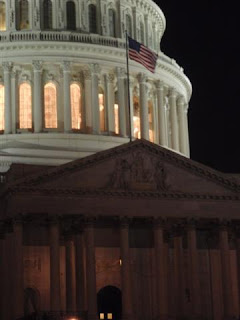 Our nation's capital on a very lovely friday evening 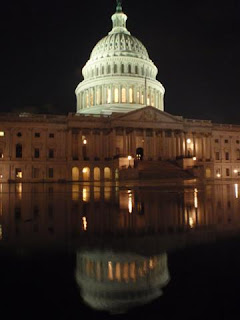 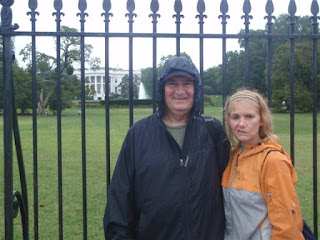 Dad and I in front of the White House early on Saturday - We got drenched!!! 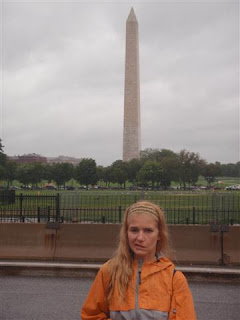 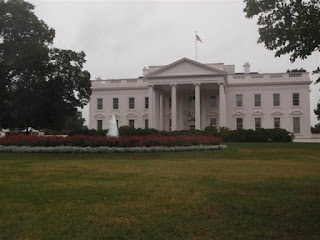 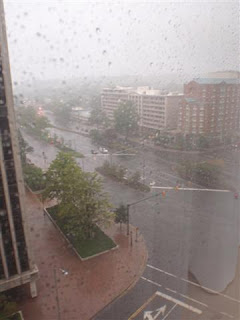 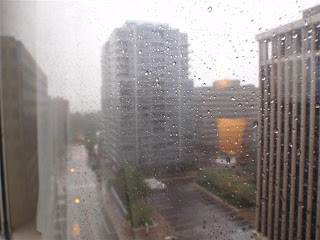 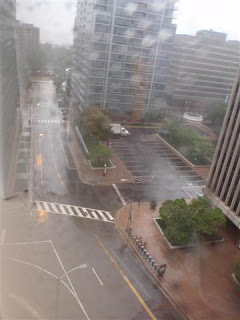 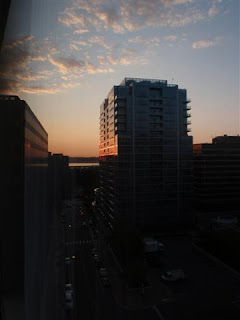 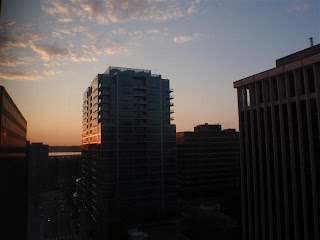 Well I guess it is about high time I give you an update! I have been busy traveling, running, and hiking.

About a week ago dad and I traveled to Washington DC for my 5th checkup at the National Institutes of Health. Like a good little trainee, I brought my running shoes with me so I could do a 5 mile run the Wednesday evening we arrived our hotel in Bethesda, Maryland. To my great luck and unplanned, there happened to be a running trail just a few blocks from the hotel.

Wow! hehe TONS of elite runners! Good thing they were going the opposite direction. I think maybe they were running clubs or teams from the University and nearby schools.

It felt great to get off the plane and subway to get out for a good run after sitting so long which is kind of difficult for me. I do not prefer hot weather but fortunately at the time I went out the sun was mostly going down and it had cooled to a tolerable temperature. Boy am I glad my sister bought that matching running skirt and bra for Christmas that I did not think I would be brave enough to wear in public! I could care less what this nearly 40 year old body looks like in the heat if it means being comfortable. And THAT I have done alot of lately! Comfort outweighs looks. ;-)

So the plan was to take 3 days off of running for travel (one day for medical appointments and 2 for sight seeing and flying back home. My 16 mile run I would do the day after our return which be a Sunday (only 1 day later than my regular running schedule). Seemed like a good plan until I got a message on my text phone from Harley after 9 pm on a Thursday night that our flight was cancelled. Apparently the hurricane that was beat down North Carolina was estimated to arrive Washington DC Saturday evening when we were scheduled to fly. All flights were shut down and the soonest flight available was only Monday night. There goes my running plan.

Sunday morning we tried to get on any of the flights going out but they were all full. As it turned out, we only recieved a tropical storm in DC with lots of rain but nothing as devestating as the media made it out to be. The next 2 days were gorgeous! However, by the time it was determined we could not get on any flights sunday, it was approaching the hottest hour of the day which does not make a good recipe for a run for this cool west coast runner.

That left me Monday morning before we flew out. If I didn't get out Monday, there was no chance of doing the long run for the week in my training schedule. As it was, I would already be jumping 2 days later into the following week. Thus, I scramed together and improvised some provisions to try to get me prepped for a long run in hot weather. All there was near our hotel was a Rite-Aide in the underground mall - no FRS drink, GU energy gel, hydration belt, or english muffin with peanut butter and banana.

Hunting around the store I at least found some gatorade, 1 liter of bottled water to carry (gratefully that a lady walker recommended to me when I was scoping out the length of the nearby trail), a marathon bar, and some tiny bottle of 6 hour energy shot. Thank God I brought my running attire and body glide along!

Ironically however, the trail just outside our hotel was the exact same trail I had always seen on the shuttle ride from the airport to the NIH. The trail followed the road and Pontomac river through beautiful scenery and past views of the captital, WA monument, Jefferson Memorial, and some other scuplture. I always marveled and fantasized at how great it would be to walk or run along the trail. But alas, I never stayed in DC up to this point where it would be a possibility. I had NO IDEA prior to arriving that this same trail would be just a couple blocks from where we would be staying.

Rising early and stretching in time to get out on the trail before it became too hot, I downed a last granola bar I had brought with me and found a fruit and nut bar in my dad's bag to try to get me some breakfast energy. I also had some pizza pretzel combos I tried quickly snorting down yet I could not eat too many as they were hard to swallow. Since I had no belt to carry the energy shot or water, I had to gulp down the shot before the run. The 1 liter bottle I had to carry in my hands continually switching off every few minutes until my wrist grew tired.

Although I did not have the "ideal" things, I think I threw together a pretty good mix so unexpectedly. The weather was hotter than I am used to but boy was that a cool run! I probably got through as long of a run as I had because I was so stoked going on an exploration I love sauntering along new paths and seeing new places. With little time left, I got to search around more places in DC than I have ever had the time or opportunity to!

Our hotel was near the airport in Crystal Springs. The trail followed the Pontomac River from the city past the airport and towards DC. I passed all the monuments and crossed a bridge in the into the old town part of DC descending down to a trail along a dried up canal. After running along the canal for awhile the trail came back up to a cobblestone and brick walkways leading me back past the lovely historic buildings.

When I crossed back over the bridge again heading back the way I had come, I veered off onto some island. There the terrain changed from urban running to off road. I went from crushed gravel and compact ground to boardwalk and then to a hiking trail sort of path until ran the entire island.

After the island I veered off another side trail leading me to Jefferson Island through a nice pine tree park and past a little boat marina where many of the boats were still on their trailers in the parking lot. From there I headed into the heart of the Federal Triangle past the Jefferson memorial and a block in front of the Washington Memorial.

In front of the Washington Monument is one of the only public restrooms so that was a good place for me to stop off and drink the rest of my water my hands were cramping from carrying. With 20 minutes left and the temperature rising, I was a little light headed and dizzy. So I rested for a minute more and guzzled some more water from the fountain before headig back to complete the 3 hour excursion
Posted by Rebecca at 10:54 PM 1 comment: