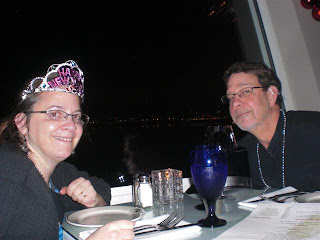 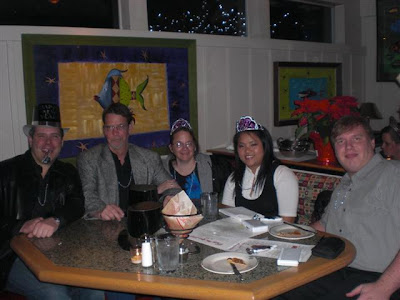 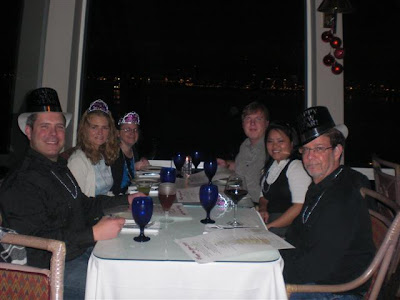 Happy New Year! To sign the phrase "Happy New Year" combine the signs for "Merry", "New" and "Year" shown in the previous posts. For the New Year's day sign the relevant topic is friends.

We rang in 2010 with some long time good friends - Pat who was our first friend we made in Seattle when we moved to Seattle in 1996 (he and Harley were coworkers at his first job), his wife Sorcha, and our deaf friends Karen and Sam (in the one photo of the couple).

It is an interesting story how we became friends with Karen and Sam. It is a strange kind of fate/coincidence thing. First of all, Karen and Sam were on complete opposite coasts of the country when they started dating. Years before Karen became one of my first ASL teachers she came to my house in Seatac when I just began to loose hearing. She was representing the state delivering a piece of hearing technology to me. We did not even remember at first when we met again years down the road. As we began to get to know each other better, we later remembered our initial meeting. I did not know ANY sign whatsoever and was puzzled that the state sent me a Deaf person whom could not speak to me (I was still VERY much hearing dependent). As a matter of fact, I think our encounter is the first time I communicated one on one with someone in writing on paper. It was an interesting opportunity and Karen was (and still IS) VERY PATIENT. Completely tramatized about losing my hearing and the possibility of going deaf, meeting her as the first deaf person who did not speak was a very positive experience for me.

After finishing graduate school in spring of 2004 and with BARELY any hearing left, I finally had some time freed up to learn sign language again (I had taken 1 class in fall 2001 but continuing the classes did not work into my schedule until years later). Harley and I signed up for a beginning sign language class to take together with some friends and one of my captioners at the local Hearing Loss/Deafness Center in Seattle. Karen happened to be the teacher and what a GREAT teacher to start out for Harley and our friends. Having a compassionate teacher was also a good a refresher for me to ease back into it at such a sensitive time (almost deaf and anxiety about pursuing treatment due to rapid and massive growth of one of the brain tumors).

Now how does Sam come into the picture? At the time I reconnected with Karen she was seeing someone long distance that she met online. Wouldn't you believe that Sam also had a VERY similiar brain tumor to the ones I have? Many years before they met, he had surgery to remove a tumor on one side of his brain that was over 4 cm in size! Hearing loss was a symptom but the doctors did not believe him and sent him to see a psychologist instead!!!! Finally the tumor became so large that it began to cause more serious and life altering side effects that prompted more thorough investigation. By that time the tumor was HUGE and the immediate surgery which followed left Sam with permanent damage to many functions (eyes, balance, face, memory).

Although Sam's tumor and ONE of the main tumor types I have share the same common name Acoustic Neuroma, generally speaking the tumors are different. Mine are more specifically referred to as vestibular schwannomas and tend to be more wrapped around the hearing nerve, more difficult to respond to radiation treatment, more difficult to remove, and often regrow after surgery. They also grow on BOTH auditory nerves which means on each side of the brain affecting both ears. For Sam's tumor type, only 1 tumor grows on one auditory nerve and as such is not "bilateral" which is the halmark of NF2. Typically people with one acoustic neuroma do not experience as severe of side effects as Sam has which is very common for those with NF2. However, Sam's tumor was neglected until it got out of hand. His deafness in both ears happened to be unfortunate luck of the side effect from medicine he had to take because he broke his ankle due to losing balance function after surgery.

Sam moved to Seattle from Washington DC and they married in August 2004. Since then, Sam has ungone many surgeries to open his eye and correct his eye positioning (for 30 years he lived with one eyelid closed as a complication resulting from brain surgery) as well as facial nerve graft surgeries and a cochlear implant. Sam and I share the common bond of dealing with late onset deafness which has its own unique challenges and living with the side effects of a brain tumor. So as you can see, a peculiar twist of destiny has drawn us together.
Posted by Rebecca at 12:30 AM