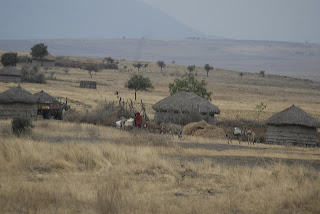 Photo on the right: Masai village among the vast grasslands of Tanzania that we passed by on the way to Manyara National Park for Safari day 1

Photo on the left:
After Ron, Harley, Tim and I made it off the mountain, on day 5 we wandered around the town of Arusha while the rest of the team pushed on toward the summit. All the ladies wear colorful wraps called "saris" and carry baskets on their heads. 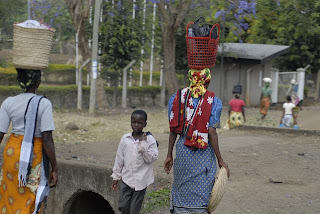 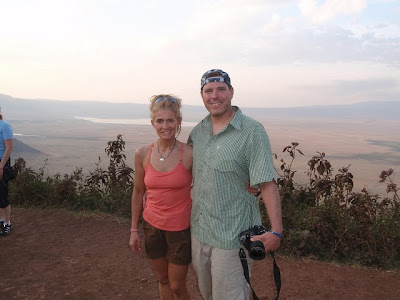 A newly deafened friend from surgery has expressed his interest in learning sign language which reminded me of going back to the beginning. Aside from just learning a bunch of signs, in order to efficiently communicate in sign language, one should at least know how to fingerspell the alphabet. For one, you need to know how to spell your own name as well as the name of others. Second, there are only so many signs used in sign language. They are LOTS of English words (in particular scientific words and names) which have no alternative but to be spelled out.
Therefore, I promised my friend that this week I was going to post the alphabet. At first when I thought about it a couple weeks back, I had planned to post each letter for each day. I was not sure it could work out but luckily the annimated sign website I have been using does indeed have a link for each letter! It will be additional fun to pick out pictures to go with each letter that I can also provide you a sign for. So you will be getting a letter AND a sign to learn! What fun! :D
It has been some time since I have addressed the Africa trip so we are going to go back to that starting with some pictures and the sign for "Africa". To enlarge the photos to get a closer look, just simply click on the picture.
Note: If you would like to jump ahead at a faster pace, you can see how to sign the entire alphabet at the link below.
How to fingerspell the alphabet:
http://www.signingsavvy.com/browse-letter
Letter A: http://www.signingsavvy.com/sign/A/5820/1
Africa: http://www.signingsavvy.com/sign/AFRICA/863/1
Note: Your hand sort of outlines the shape of the continent.
For both the alphabet and signs, practice in the mirror to see if you are signing or forming handshapes correctly.
Posted by Rebecca at 4:03 PM