I get by with a little help from my friends ~ 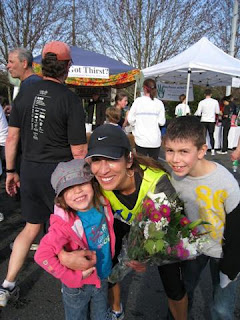 Team Captain Cindy Rulon of "Team Madison" pictured with her two children. Madison, the girl on the left is the team honoree afflicted by NF1.

I must confess that I am TOTALLY not a morning workout person and most definitely not an early runner except to do an event. I generally procrastinate the run all day and typically get out an hour to a half hour before dark. But team captain Cindy Rulon on the NF endurance team arranged the first team run for Saturday morning IN the town I live outside of. So I really did not have a good excuse to NOT go! Rather than a hindrance, I think the sharp spastic muscle cramp in my calf at 7:20 yesterday morning was God's way of ensuring I did not sleep through the alarm again!

Reminiscing back to my team in training days in 2006, I was missing the "team" spririt and motivation which accompanies being part of a group working towards a common goal. With the exception of my dogs, I have been running on my own for quite some time now. The will to run was starting to peter out on me this week so something scheduled involving other people is exactly the strucure I needed.

Unfortunately nobody else turned up but this ended up being a bonus for me as the team captain ran along side me the entire way! It was a especially unique to sort of focused attention because she is a full marathoner who I know has a much faster running pace. But kindly she ran along side and encouraged me the entire way by giving me a thumbs up at each mile.

Although it took some adjustment to learn to run with someone and was a little distracting, it sure was nice to have someone at my side cheering me on and supporting me the whole way. Being a Saturday morning on a popular trail in town, there were LOTS of other runners. There were also LOTS of people passing me which was discouraging. But with Cindy next to me the whole way, the feelings of discouragement were momentary as her presence kept me focused on the goal....3 miles, 3.5 miles, 4 miles, 4.5 miles, and finishing at 5.

I could have went for 6 as the training schedule I am on called for in week 3. However, I started the 10 week training 2 weeks early anticipating any need for injury, illness, or cutting back to recover. My training runs this week were very difficult/miserable and my body so fatigued. To start out I had no idea how it was going to go and just had it in mind to finish at least 3. As we ran along, I chose to go a little further. When I reached 5 I was satisfied to not overdo it in hopes that I would be recovered for a good week of training runs in the days ahead.

We ran 3 miles out from Marymoor Park which gave us a nice 1 mile cool down on the route back. Aside from allowing my body a good recovery walk, it gave Cindy and I some time to get to know each other (another bonus of being able to do a training workout with the team captain). Of course I am deaf and unfortunately conversations out in the elements are not exactly a 2 way street. Therefore, I ended up doing all of the talking and had the opportunity to share my NF story of being afflicted with NF2 (Cindy's daughter Madison has been diagnosed at a very young age with the other form of the disorder known as NF1).

It was a great way to end a tough week/road block in my training. A third added bonus is that Cindy reminded me that it was still morning and that I could rest, relax, or do whatever I want for the rest of the day! What a terrific weight to have off my chest and how freeing!

Thanks Cindy for the run and your encouragement! It was exactly the shot of motivation and inspiration I needed this week! :D
Posted by Rebecca at 11:42 AM

Beck don't pay attention to the people who pass you, there is always someone faster, even the fastest woman in the world is constantly checking over her shoulder! Run your own race, set mini goals and when you reach them don't measure them against other peoples', they are yours to own and celebrate. I hope we get to run together one day girl!