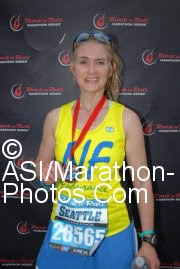 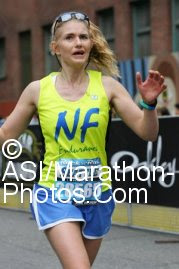 Pleasantly the Seattle Rock and Roll half marathon on June 26th went very well for me despite the difficulties I had during training with severe anemia resulting in mental/physical fatigue and hamstring tendonitis that I sought a therapist for. Honestly after the first month of training, I had concerns about whether I was going to need to walk or walk run this one. I questioned if it was just too soon post a major brain surgery to take on this kind of demand on my body (twice as many this time.....4 brain tumors operated on only 7 months prior to the event). However I was going to do it, I was committed to following through and honoring my word of running and raising money for the NF community.

This year, being my second half marathon run, was pretty exciting as not only was I a part of a team but my husband and sister were also running the half marathon with me - the more the merrier! There is nothing like teammates to motivate you - especially for something as grueling as a marathon!

The night before, Harley and I had a great time at the team pasta party meeting with the team from various parts of the country, learning stories of other NF patients and learning the meaning behind running or walking for this cause. FINALLY, I got to meet the infamous Steve Kendra - director of the NF endurance team - who I have been cooresponding with for years (Steve traveled out from Pennsylvania for this event).

Every year when I engage in an endurance event for a cause I am greatly moved by meeting truly altruistic people who choose to take on this kind of challenge AND raise money for a cause out of the goodness or their hearts not having any connection to NF or any other cause. Those kind of people are TRULY amazing heros to me! Again, this year I had the good fortune to be sitting at the same table with this year's NF endurance "good samaratin". Thanks Cookie! It was so great to meet you and Ken!

The morning of the marathon my sister and I lost track of my husband Harley. There were thousands of people!!!! I heard there were AT LEAST 27,000....the largest event I have been in by far. So my sister Michelle and I started out together in the same corale which was rather special. :)

In this marathon there were quite a few more participants than when I ran the Eugene half marathon last year. Therefore, I had to do quite a bit more weaving in and out of people as well as passing. I had no idea what my finish time would be this year because I had such a hard time training. Thus, I did not have a good estimate for my starting corale but that was ok because I really enjoyed starting out with my sister.

I knew for certain that I finished just under my finish time from the year prior. Amazingly however, I finished in just over 2:05, 9 minutes faster than last year!! So I definitely earned the huge bling they draped around my neck when I crossed the finish. But even more than my physical effort to earn the medal, I earned by fulfilling a promise to raise research money for the NF community. That is the part that is important - Running for a Reason.

Thank you to all of our supporters and my parents who came up to join us in celebrating/cheering us on! We love and appreciate you GREATLY! Thanks for helping us to earn that "bling". ;-)

If you are just learning of my event now or did not get a chance to donate, there is still time if you would like to contribute to NF research. Just visit the following link to make a secure donation online.
http://www.active.com/donate/nfseattle2010/RDufek1
Posted by Rebecca at 7:42 PM