Signing my life away - Preop 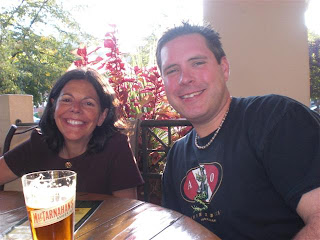 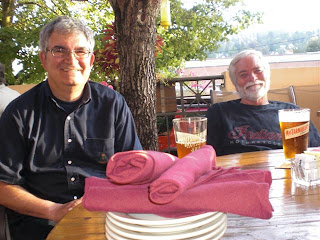 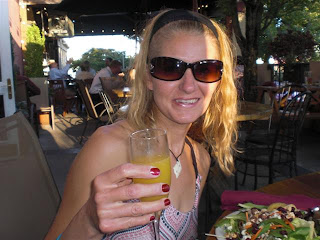 P.S. - Thanks Dave & Christie for opening your home to us and letting us stay with you while in Portland! It was nice to have a home to go to that evening!


Last Thursday we traveled down to Portland (3 and a half hour drive) for my "preop" appointment.

Well I was not even quite sure myself. Last time I had surgery in 2007, my preop was less than a week from my surgery. The surgery was bumped up because I took a downturn by an unanticipated onset of painful trigeminal neuralgia (random shocks of face pain described as suicidal on the TNN website). I had a reaction to the medication to allieviate it and became horribly ill. So I was given steroids to lessen the pain of each random episode. As a result of medication, shock, pain, and anxiousness, I have no memory about what exactly preop was about.

So it was equally my best guess as it is yours.

We arrived and a resident doctor met with us to have me sign a legal document saying I consent to the procedure, what the team will be doing, that I understand the procedure, and finally accept the risks involved.

That was all fine and dandy but the WRONG surgeon was listed and the procedure/surgery not entirely accurate! Oh Lordy! LOL That sure did not reassure me! So being freaked about the major error which I was assured was "just a typo", there was no way I was going to sign the form.

Therefore, due to legal requirements, we had to come back the next day when issues were verified/answered and the form corrected. It turned out alright though as on Friday we were able to meet with one of the surgeons on the team who assisted in my previous surgery. It was GREAT because we learned a few things we did not know (did not even know he was on the team and that there are 3 surgeons present and taking part in the operation). It was also great to talk to the source and a specialist who has actually "been there" and will be involved with the upcoming surgery. That way there is no guessing or "I do not know" answers. You get the facts straight up. Sometimes those can be hard to swallow but also you then know what you need to mentally and physcially prepare yourself for.

So PREOP is the last chance to ask any burning questions, to make sure it is fully understood what will be taking place, and to have the potential risks explained to you so that it is understood what they are should any happen. Once this is reviewed, talked about, understood and accepted, you make the decision if you are going to "dive in" and put your faith in the team. Literally you decide to to put your life in their hands by "signing your life away". It is te final committment and "go ahead" to the surgery.

I have to admit that I felt sick Friday morning (nauseous) with a bad headache that lingered throughout the day intensifying before bedtime. In addition, I had a dull but mild pain running from my ear to the underside of my jaw freaking me out that at any moment I could have the onset of trigeminal nerve pain again. Thus, my feeling was "let's get the darn thing out of there before it kills me!", even if death is a risk of the surgery. At this point, it is the only chance I have. If I continue to go on with it inside my head, I risk disasterous and catastrophic side effects worse than dying. I have accepted that and know I need a surgery. The rest is all details regarding my choice of experts I put my trust in and my confidence in the specific procedure of how they propose to remove the tumor and how much of it to remove.

Therefore, as long as the proper surgeon was listed and the details on the form more specific, I was ready to sign. It was an unexpected and welcome treat that we were able to meet with one of the surgeons on the team. Seeing this wonderful opportunity to have a better insight, we grilled him with questions covering all bases. Due to this spontaneous meeting, I was unable to have a captioner so he was fantastic in writing to me and even drawng pictures. We took up the maximum amount of time he had and he told me I could take the form and look it over but I had already thoroughly reviewed it in the pauses when he was writing. I was ready to sign and so I did!

The surgery and approach

The surgery will be a left obccipital craniotomy for debulking of the left cerebello-pontine tumor (the large vestibular schwannoma on my acoustic nerve) via the retrosigmoid approach. A debulking is when they remove as much of the tumor as they feel is safe, with the attempt not to damage any important structures such as the brainstem. How they do this is to open up the tumor and such out the insides such as taking out the insie of an orange. I also have an additional tumor which has merged with the larger one. They will try to remove that one entirely if they can. It depends on what they see when they get in there and if they can avoid damaging any nerves by the removal.

For the approach, a large C shape incision is made surrounding the entire ear. Then the cerebellum is lifted in order to access the tumors.

The surgery will take 6-12 hours. Again, it depends on the situation once they get in. The tumor is not round but more oddly shaped like an ameoba and has grown into the auditory canal. Best case is 6 hours.

We also talked about what would happen if the brainstem became damaged. I asked for it straight up so I know what I am up against. He told me that brainstem damage could cause inability to walk or breath(meaning I would be on a ventilator). LOL My reaction was a sarcastic "Oh GREAT!" It just naturally flew out of my mouth as if it were a normal part of conversation. After that he emphatically wrote "But we will do everything in our power to prevent that."

And I definately believe him and that is why I chose this team. With that, I signed my life away.
Posted by Rebecca at 9:28 AM

I hope everything goes well, Beck! Keep all your exhilarating experiences from the past months in mind!

Similar surgery, many years ago, took over 19 hours for me. Of course, we are out and don't worry about the time. Everything went well. My cerebellum did start to swell in the later steps of tumor removals, and part of the cerebellum was removed to stop that. (I wouldn't know it if not having read the surgical report--and it worked like a charm to keep me going.) I recovered functions quite rapidly after surgery even though it was another relearning all the basics deal. I finished undergrad strong and went on to grad school, with cognitive deficits coming only later from meds/meningiomas. I was conscious and on the vent in ICU, as a precaution only due to the brainstem involvement. (Sorta precautionary to make sure I was up to breathing fully on my own, rather than having to risk another intubation post-op. They usually restrain folks when on vents so they don't try to pull out the tube. Relax and let them take care of you-- it can be a normal part of this surgery--it doesn't mean you are on the edge of long term vent dependence.Just focus on calmness and healing , and your body will respond well. Vision was bad when I woke up--I would just stress to caretakers and nurses to keep eyes lubed heavily, and allow them to take care of you in the days after surgery. (I know, that's easier as a teen, but you won't miss much, and relaxing is a huge boost for recovery.) After riding out not being able to see, hear, control movement and sensation, or perceive surroudings in ways we are accustomed, experiences are that much sweeter. I know you've had a taste of this recently, and encourage you to feed off of the potential, no matter how you feel immediately after waking up from surgery. I'll be thinking of you! Healing hugs, Jamie