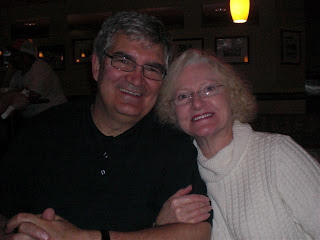 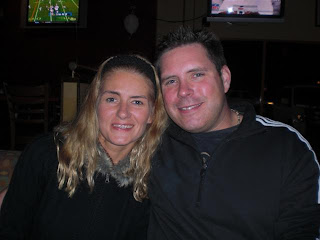 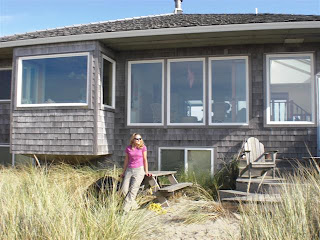 pictured - mom, dad, Harley and I at "The Spot" sports bar in Scappoose
Bottom photo - me in front of the Hammond beach house in Pacific City on the Oregon coast


The day before surgery was gorgeous at the beach and we were reluctant to leave! However, our time and purpose there had come to a close. It was time go back to Portland to face reality. We were very fortunate and blessed. It was a fantastic refreshing weekend at the beach with beautiful fall weather. We packed our things, cleaned the house, said our goodbyes and headed to my parents new home in Scappoose just outside of Portland.

When we arrived, Harley, my mom, my parent's german shorthair dog Hunter, and I went for a long walk exploring their neighborhood and the ridge overlooking the valley where they live. Just as we had finished the walk, my dad arrived home from work. So we all went into town for some dinner.

In the small town none of us knew yet, there did not seem to be many options but I found exactly what I needed and was looking for. This time around, I wanted to go for something simple, light, and not too spicy which would give me acid reflux up until the surgery. I thought about this for many months before surgery and determined the best thing to probably eat beforehand would be chicken and mashed potatoes.

Down the road we traveled we found the choice of two local restaurants. The one we chose was a sports bar called "The Spot" - It was pretty cool but truthfully I was worried that it might be a strip club at first due to the peculiar sign outside and the name. ;-) It was all good however, and we were able to have a very nice intimate dinner with my folks (not overly crowded where we had to wait and a homier feel to it).

The restaurant had the perfect menu choice for me available in a smaller half order (what is sometimes referred to as "ala cart"). The meal consisted of chicken breast brushed with Jack Daniel's BBQ sauce, mashed potatoes, steamed brocoli (some of the best I have ever had), and a small salad. It was like they knew I was coming!

For most of the day, I had kept it light and consumed mostly liquid things. Before my last surgery, I foolishly gorged myself at dinner the night before leaving me with the feeling of a heavy rock in my stomach and a continual acid reflux of spicy thai curry all night long. This was a horrible mistake not only because I could not drink anything and kept burbing up curry before the surgery, but also because it was terribly awful to throw it up after the surgery.

Knowing that it was most likely that I would get sick again after the surgery, I tried not to overeat and to keep to milder foods (LOL not to eat zingy curry at a place called the "Typhoon" - LOL). I contemplated what foods would be the the easiest to throw up - liquids and things liked mashed potatoes. Sounds strange I know, but it is quite an important consideration in order to make the surgery experience as tolerable as possible.

After dinner we went home and I went to bed at a reasonable time to get more sleep before the surgery this time. Following my 2007 surgery, I could not sleep for a month due to the steroids and finally had to beg for a prescription sleeping pill (Ambien). Therefore, I wanted to be as rested as possible before this surgery in anticipation that I may not get sleep for awhile.
Posted by Rebecca at 5:50 AM