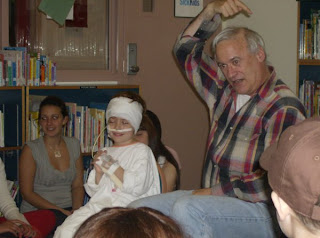 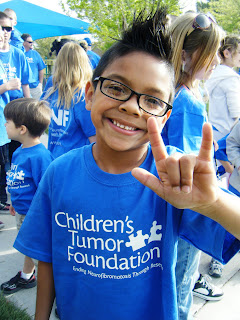 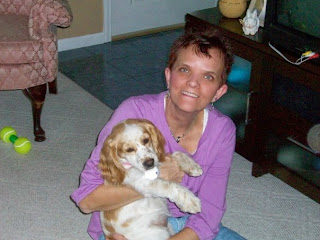 On the 26th I will be running the Seattle rock and roll half marathon for the Children's Tumor Foundation NF Endurance team. I am running for everyone affected by the disorder Neurofibromatosis.

The pictures above are some of my "NF heros" who inspire me to keeping pushing when I am tired, my legs hurt, I can't see straight from double vision, my feet are blistering, and my glute and hamstring are aching due to tendonitis. Personally, I feel my trials pale in comparison to what they have been through already in their young lives. Their incredible attitudes of perseverence in spite of challenges, hardships, and tragedies motivate me to continue to fight for this cause even when I am physically as well as emotionally tapped. (Truthfully, fundraising can be as trying as the physical if not more at times.)

Karin's story (in the purple shirt with her dog Amber)

Hi! I Have NF1 and Pseudarthrisis of the tibia. My leg broke at 8 months old in a cast. It was placed in a cast to protect it. With this condition associated with NF once the leg breaks it never mends. Amputation was suggested many times to my parents but they rejected. I was put through many failed bone graphs and orthopedic operatons. Back and fourth from a long leg brace to a cast. I was in a long plaster cast for 3 years for each operation, then back to a long metal leg brace, pins, rods, fixaters, and operation after operation it never mended. My shoe size was 4 size differences and 3" shorter in leg length. Just 7 years ago I developed a major bone infection due to all the failed operations. I had no choice but to loose the leg in the long run. I still have tons of pain 24/7 and major phantom pains. I have no idea what life is like with no pain. I manage OK and get by OK. I'm a part time teacher's aide and enjoy working with kids. I have a womderful husband and a nice home. I feel lucky compared to some people with NF.

Note: Karen and her husband have chosen to not have children due to the 50% chance of passing on this genetic disorder to each offspring. Karin does not wish to put a child through the pain and constant operations she has been through. Many others with NF feel the same. With the tumor load many with NF2 have in the brain and spine, a pregnancy is very harsh on the body and is believed to encourage sudden rapid tumor growth.

JT is a very wonderful 7 year old little boy and a budding endurance athlete running in children's races for his friends in the Children's Tumor Foundation. JT lost his grandmother to NF2 shortly after he was born when she was only in her early 40s. His mom Olivia (who is another hero of mine and motivates me to do these runs....I try to keep up with her! lol) is also an NF endurance athlete with NF2 and team captain down in LA. Olivia has endured SEVERAL spinal surgeries as well as radiosurgery for tumors on her optic nerves, cervical area of her spine, and in her brain. Although JT looks normal and has a fantastic smile just like his mom, he also has a tumor on his optic nerve and is blind in one eye. His saga with NF2 is only just starting. That is why what his mom and I are doing for our cause is so important so that we can provide hope and a chance for children affected by NF.

Devon's story (during group storytime in the hospital)

Devon is 8 years old currently but his journey with NF2 began 3 years ago. Since then, he has already had multiple brain surgeries and spent lots of time in the hospital but he always manages to have a winning smile on his face! He is another budding athlete who participates in children's marathons in Canada. Here is what his mom Kim wrote about him:

Devon is a spontaneous mutation (meaning it was not genetically passed on to him from parents or grandparents). He was diagnosed at age 5 because of the devastating effects of a large meningioma compressing his brain stem. At the time of diagnosis, he also had 4 other tumors and was blind in the (r) eye from one of them.
Devon has had 3 surgeries, 2 when he was five and one when he was six, all for the same tumor. He had a meningioma next to his brain stem involving the 5th-9th cranial nerves. When diagnosed, it was the size of a baseball. The residual tumour is now very small but it was a very aggressive one and they could not remove it all (it is "stuck" to a major artery in the brain). They decided it needed to be radiated or it would grow back and the opinion was that they could not operate anymore. So he had 6 weeks of daily radiation, 5 minutes per day.
He has also had a few smaller surgeries for post op complications. He developed a Meningocele after the 3rd surgery that required inserting an external ventricular drain into his spine and 3 weeks of bed rest.
In the fall the MRI showed enhancement (growth) on the 8th cranial nerve indicating the start of bilateral vestibular schwanomma's (the tumors which cause deafness, loss of balance, and facial paralysis). He is currently 8 yrs old and living life to the fullest! He is an inspiration to me!
Posted by Rebecca at 10:28 PM

Great post Beck! I am honored to have you running for JT! Because of efforts like yours I can sleep easier knowing he will have a bright future ahead of him!