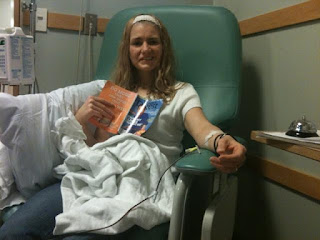 So I last left you with the story of my increasing fatigue and difficulty functioning. 4 weeks ago I emailed my general internist on a friday about the issue and he ordered me to get a blood test that weekend. When Saturday rolled around, I did not think it was THAT urgent of a problem so I did not get the blood test until in the early evening because I had to drive to a different town.

Apparently, they can get results back fairly quickly. I imagine the friendly technician was also took extra care in the urgency of the results as I had explained I was having a significant fatigue problem and difficulty with my endurance training.....the tech is also an athlete and competing in his first triathalon. I also mentioned in our conversation that I was a blood cancer survivor and had brain tumors on top of that! Therefore, I am sure he was anxious to analyze my results and that my history raised some concern. I went home happy with the pleasant phlebotomy experience and relieved to get it taken care of, not expecting to hear anything back until the next weekday.

Around 10:30 or 11 pm, Harley gets a call on his cell phone. I wondered who could be calling him and he seemed rather serious. When he finished the call, he signed to me that it was the doctor who could not reach me. My results were not good and he urged us to go to the emergency room. It was an on call doctor from my general internists office who left several messages on my VCO phone. People VERY RARELY ever call me so I am not in the habit of checking for messages regularily. Hence, the late evening call.

I was severely anemic with a hemoglobin count of 7.5 which was only 0.1 higher than when I was diagnosed with cancer. I had periods of slight anemia following my first surgery in 2007 but nothing ever serious which raised the attention of doctors. The hemoglobin is the oxygen carrying capacity of your blood and mine was so low that it is no wonder I was struggling to breath after 15 minutes of running. The hematologist we saw later was surprised I even managed to run 3 miles and to keep up my activity level as long as I had.

So it was late at night, I was tired, and I just wanted to go to bed instead of sit in an emergency room for who knows how many hours. My last experience there was right after I came home from brain surgery where I was so ill that when they finally called me into the office, I started bauling because I could barely wait to get a bed and an iv to feel better. After my blood test, I had stopped to workout at the gym and had yet to shower. Having spent my energy reserves for the day, I so badly wanted to go to sleep instead of sit in the waiting room of an emergency room.

I pleaded to stay home and wait for morning to go the hospital. But the doctor informed Harley of the potential seriousness of the situation and the urgency that I come in to get further tests taken. This scared me. I have never been called in like that for anemia before. While I showered I became more amd more disturbed and frightened.

To make a long story short, after several hours at the emergency room and another IV, I was finally released after my tests came back clean. Phew! There were still additional results to come in but the important ones and chest xrays I passed. The ER doctor was reluctant to tell me what they tested for as she did not want me to worry unecessarily. She said it was a long list of like 40 things and my vitals were actually great, unlike the time I had severe anemia at my cancer diagnosis. After speaking with the hematologist, the ER doctor instructed me that there was no immediate danger and that I was to have an appointment with the hematologist at the Cancer Center monday to discuss an iron infusion treatment.

What a HUGE relief! - both physically and mentally!!! It was a little psychologically difficult at first to get my first 2 infusions because I had to get them at the same place that patients recieve chemotherapy. I HATE needles and getting an IV. Going through the drama of finding a vein, warming the veins, and pumping stuff into me reminded me of chemo which gave me an unsettled feeling. When having an IV after surgery, I was too drugged up and sick to care so it did not affect me the same. Now however, I was not drugged up or sick where I was desperate for them to pump medicine into me. My IV time was drastically shorter than each chemo treatment I had! Each infusion was a half hour or less instead of ALL day! Further, instead of making me feel like total crap afterward, each infusion made me get stronger and stronger where I craved more so I could have the energy to take on more activity.

My treatments were twice a week for 3 weeks. The second week my mother-in-law was here and accompanied me to each treatment. Visiting with her while we waited for an IV nurse and for my veins to warm up so they can find one, eased my anxiousness about being poked. I tolerated it quite well and found going back very favorable as each treatment allowed me to return to running/training and go further. I actually slightly missed that treatment ended after 3 weeks as each gave me a boost. At the end of 3 weeks my blood chemistry was re-evaluated which improved remarkably but still slightly anemic. At the end of last week I was getting tired again so on friday another blood test was taken and I was given half of a dose. This time my blood chemistry was nearly normal but the hematocrit at the low end so my body is probably "deconditioning".

So now why did this happen in the first place????

Well we really do not know. It is possible that I am experiencing gastric bleeding which is common with runners. Today I met with Gastroenterology and the doctor wants to investigate to make sure I do not have an ulcer or something causing intestinal bleeding. We are doing the test before the half marathon because if I am having gastric bleeding, it could become compounded by the strain of the upcoming half marathon.

Another possibility but extremely rare is that I could have an intestinal schwannoma which has been found in NF2.

So although I am doing great, in the back of my mind there is a litte tiny uneasiness as my grandfather had colon cancer in addition to blood cancer - not exactly favorable family medical history in relation to this test. I am hoping it is nothing too serious that would need any kind a procedure which could hinder my training and event. So send me good vibes! :D
Posted by Rebecca at 2:20 AM

You have my good vibes and I'm sending positive thoughts your way. Keep us posted on your progress. hugs

I am so sorry you have been through yet another battle. Your anemia sounds much like my mono and its no fun. Hope to see you at some of the TSNW trainings.