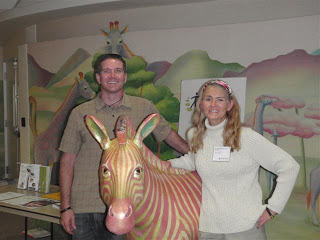 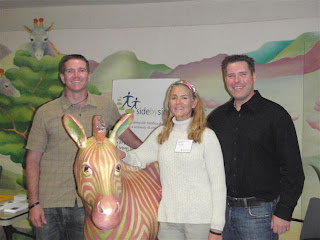 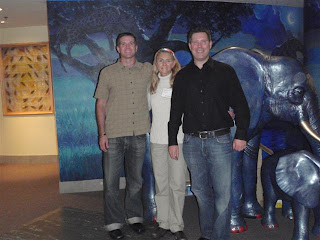 It is about due time for a reflective post. I decided the above title topic would be a good one to tie in with the Kili trip story and how Sean Swarner fits into all of this. If you do not know because you don't know me well or have not been paying attention, Sean is a HUGE source of inspiration for me. His altruistic example really ignited the fuel for this path that I have followed for the past 5 years.

Flash back to spring 2004 when everything came to a screeching halt. I think God had something bigger in store for me which took me a few years to see. I was about to graduate from the University of Washington Masters in Teaching program for science. Although I was losing A LOT more hearing and feeling increased pressure in my head, I was eager with plans to continue onto the next phase of life with my peers. I had it all worked out.....have fun teaching throughout the school year subjects I love (preferably my dream classes of marine biology, oceanography and geology someday), spend the summers traveling and engaging in diving research/educational projects abroad, start training to become a mountainier and of course do more diving in the PNW. It sounded like the perfect plan and life. ;-) But then on the day of my final graduate presentation, on our way to the University, Harley and I recieved the news that one of my slowly growing tumors had increased in size by a WHOPPING 1 cm. Since diagnosis in 1999, the tumor had only grown a minimal of 0.5 to 2 mm on a yearly basis. Thus, 1 cm was ENORMOUS!

I think I made it through my presentation because my mind was simply unable to comprehend the seriousness of the situation. I couln't grasp the very REAL possibility of life changing as I had known it along with my perfect plans. Aside from a problem with my lips sticking together while speaking - maybe it was a combination of nerves combined with subconcious worry over my medical future that brought on a horrible case of dry mouth - I made it through the day relieved to be finished and on my way to getting the degree I had worked so hard for over the last 2-3 years.

Immediately after graduation, we left out of country on a trip we had planned. Therefore, we were able to further delay thinking about the gravity of what was about to happen. When we came back, a decision had to be made neither of which was simple. We could no longer decide to do nothing and a definite treatment had to be chosen. For fear that surgery would either kill me or leave me with worse......permanant life altering damage, I chose the radiosurgery route. I thought it would be the easier of my choices with very minimal side effects and a fast recovery time.

Easy nor a quick recovery was not to be! I could write a very long post about all that has ensued over the following months and years but I will save you the time and space to give you a brief synopsis......

Instead of being hit with very bad side effects immediately after like chemo, I was hit with waves that dragged out and continually changed and worsened over time. At least for me, when I went through chemo for cancer 17 years ago, the beginning hit me the hardest and when I was the sickest (1/3rd into it). A point finally came within the 6 months of treatment where I began to feel better and hope seemed brighter. I started to get back to the person I was before the chemo. It is not so for NF2.

First of all, I told you that I was losing hearing. On the third day of treatment I was rendered permanently and completely deaf meaning unable to hear the loudest of sounds such as thunder, a bomb, and a rock concert. Now that might not seem so bad. In fact I now view it as a minor annoyance at times. However, to be raised within a society dependent on hearing and abruptly thrown into a world of not being able to percieve sound anymore takes a great deal of adjustment. There is not total silence because the brain often creates tinnitus which is ringing in the ears that can take on the most maddening sounds! One must learn to channel out the distraction and rely on other senses in order to function and fit into society again. It can be overwhelmingly stressful.

Hearing loss was not even the half of it! Over the next several months my balance function deteriorated, my eyesight and facial function decreased along with memory and comprehension, and I experienced bouts of sickness and fatigue. For a long time, YEARS, I could not even feel my feet and fingertips nor cry. It was quite an ordeal to tough out and one that left me vulnerable and on the verge of losing hope. Unlike my 7 month cancer experience, things continued to DIGRESS instead of PROGRESS. I also looked pretty horrible within the first year from taking steroids over such a long period leaving me with weight gain, bloating, acne, teeth crumbling, and my face swelled up like a water balloon. To say I was heartbroken is an understatement. I was DEVASTATED!

But anyway, back to how I got out all of this.....Finally almost a year later the radiated tumor stopped swelling and I got off the steroids. With medication for my eyes and no longer needing to depend on steroids to function, I began to have some improvement.

One day a letter came from the Leukemia and Lymphoma Society with Sean's story about surviving 2 cancers as a kid both of which he was given a very poor chance for survival (3 weeks to live for the first cancer). Against the odds he surprised all and grew up to become an accomplished mountainier. With partial lung capacity, he climbed the tallest mountain in the world - Everest - to bring inspiration and hope to everyone affected by cancer.

When I read that I felt moved. I had the desire to inspire others the way he had inspired me to come out of the darkness. Sean had the same cancer I had. Surely if he could survive through a terrible ordeal AS A KID and live to do something superhuman for a very meaningful purpose, I could get off my self pity duff and do something too.

At the time, my grandfather was diagnosed with another cancer after 14 years of remission. Only this time the second cancer was eating him away very quickly. I felt helpless as I lived all the way across the country. Motivated by Sean's example, I chose to take on something I could do which was my participation in the American Cancer Society's Relay for Life in my grandfather's honor. If I could not save him, at least I could help save others by fundraising for research and patient education and support. What was to be my participation in a team flourished into me being team captain leading the team voted with the most spirit at the event.

Over the years I followed Sean as he climbed the tallest mountains on each continent carrying the names of cancer patients on a flag he buried at each summit. In fact, my friend Skip, my grandfather, and I are on the flag of his final 7 summit tour on Denali in Alaska. I sent texts of encouragement to their team and followed their progress on his foundation website, Cancer Climber.

Part of what his foundation has done in addition to funding research scholarships, is providing adventure grants to young cancer patients. One grant was honored to a boy with brain surgery who climbed Mt. Whitney on crutches! Wow! To me that was most incredible and unbelievable! After learning that someone could hike with crutches, I started to believe that I could hike again with hiking poles if I worked really hard to overcome my balance dysfunction. So little by little I began to slowly get into hiking again over the years - LOTS of walking, some running, and an easy hike or 2 a year, easy being usually an accessible path or trail for MOST senior citizens and young kids.

In fall 2007 I had my first brain surgery which provided me with many improvements. Granted I was far from being 100% restored but I could cry again, feel my fingers and feet again helping compensate for my loss of hearing, and the swelling which endangered my eyesight was gone. Further, I joined the gym and strength training combined with water aerobics greatly improved my stability. I was enjoying feeling better.

Following over a year of things FINALLY progressing, the idea of climbing Kilimanjaro reawakened as perhaps a possibility one day. On facebook, friends were sharing their bucket lists and Kili was on the list of my NF friend in Austrailia. Openly I admitted I wanted to climb it too and commented how it would be very cool for us to climb Kili together in support of NF. She has NF1 and I have NF2. It is kind of funny because at the time, I was VERY FAR off from being ready to do it. I had not even REALLY gotten back into hiking yet. That would start in June 2009 after I finished training to run my first half marathon.

Somehow on facebook Sean got wind of my desire and was leading a Kilimanjaro trip in summer 2009. He sent me a message about knowing I want to go which made me further believe that it could be possible. However, there was no way I was prepared to go within a few months. First of all, I was told in April 2009, only a week or 2 before my half marathon, that I needed another brain surgery. :( Argh! Second of all, I was not conditioned for that kind of hiking nor would there be adequate time for me to train even if I did not have to get brain surgery.

So I spent the summer hiking with my cancer survivor friends and having fun before possible impending doom of the surgery. I dragged it out and delayed the surgery as long as possible deciding October would be a good time to have to be laid up. LOL We did however have in mind Kilimanjaro going into surgery. My surgeon was confident I would be able to tackle it. It all hinged on how I fared through the surgery and coming out of it. Perhaps that is another incentive that kept my atitude positive and my will to live strong.

A few weeks ago, I had the blessed opportunity to meet Sean in person and see his presentation at the Children's Hospital in Seattle. Another fantastic treat is that I got to see footage of him burying the cancer flag bearing the names of my grandfather, my friend Skip, and me on Mt. Denali in 1996 when he completed his climb of the "7 summits" - the highest mountain on all 7 continents.

Thank you Sean for all your inspiration, motivation, and fine example! You are a hero! :)
Posted by Rebecca at 5:47 PM