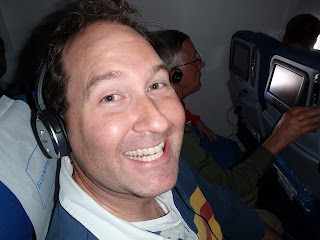 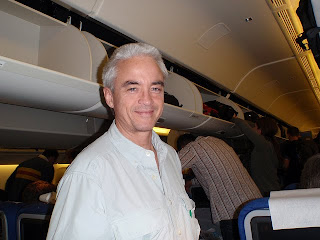 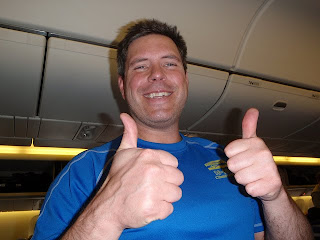 I am going to back up a moment and deviate from the journal entries to do a little recap and filling in of energy caught on film. As you will see, the entire team was filled with excitement and anticipation for the trip and long journey ahead of us.

Here are some great shots of Harley, Pedro, and our guide Tim grinning from ear to ear. This is right before we were taking off out of Seattle heading for Amsterdam. I think Harley was WIRED and ESTATIC. Tim, the pro at this having been to Kilimanjaro 5 times, one of which being his honeymoon, was all set for flight to start out with a good movie and some tunes with the headphones on. As you will see in later photos, Pedro and Merrie occupied themselves with reading material in between watching movies and occasional bouts of sleep (we know because they were in the seats directly in front of us).

Chris as you will see with Shane, well he is ALWAYS smiling. In fact I used that as his name sign - The letter C moving up from the middle of the mouth to form a HUGE smile. Patrick, who we met later, also is always smiling. I think the only time I caught them both with a serious straight face is when Tim was debriefing the team about the summit push before he went seperate ways with the team to accompany me back down the mountain on day 4.

So right out the gate, the enthusiasm and energy of the team was magic! These are truely GREAT people! Harley and I feel so blessed to travel and climb with such a wonderful caring team grateful to help this cause - Wow! Every team member contributed a significant financial and time investment to make this expedition and movie happen. It is really amazing! What an honor to be graced with all of their involvement!
Posted by Rebecca at 4:13 AM