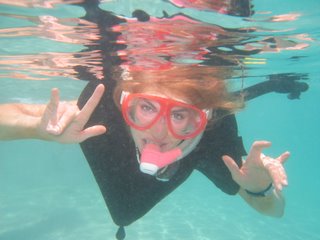 Photo taken by Harley Dufek on June 26, 2006 in Labadee, Haiti.
ILY- means "I Love You" in ASL.
Here is a sneak peak at my very first reintroduction swim in the ocean since the first day of my treatment in July 2004 when I went boogie boarding off Santa Cruz beach. The photo was taken in the waters off of Labadee, Haiti which was our ship's first port of call.

Although I needed assistance in and out of the water, I was thrilled to be able to snorkel and finally return to the underwater world which I love so much.

In the caribbean it is the law that you have a snorkeling vest so that is the black thing draped around my neck. I did not mind as I was able to float along over everything without having to worry about swimming. It was difficult at first to remember that I was not diving. The vest sort of gave me the feeling of a scuba BCD so every now and then I would forget and put my whole head under the water while still breathing on the snorkel. Hehe...nasty awaking swallowing that salty water!

I have not realeased the photos yet (I will soon) but I did suffer a significant facial paralysis for more than a year. At the worst point, I could not move half my face and I was concerned back then (not only of looks) but of whether I would be able to breath off a snorkel or regulator. For a long time I did not want anyone taking pictures of me and I did not want to show anyone photos of me. Thus the long absence of photography on the blog for a period of time.

Fortunately I have regained most of my face back (there is still some facial paralysis which you will notice in pictures of me.....most notably the framed formal anniversary photo I posted). However, I have gained enough function back now to breath on a snorkel with ease. I can even sip on my hydropack now (I am pictured wearing it in the Mayan Ruins photo of us) without having to hold my lips shut. We will see how it works with a scuba regulator when I am ready to try it out.

If all else fails, the snorkeling worked out great for me (with the exception of getting out of the water on shore.....I cannot stand up in water at my knee level or below!). We snorkeled for I think 2 1/2 to 3 hours in Haiti and then went from a boat in Jamaica and Grand Cayman which was nearly not long enough.
Posted by Rebecca at 11:11 AM