Lattice Face - A Continuation of 2 Years Ago Today 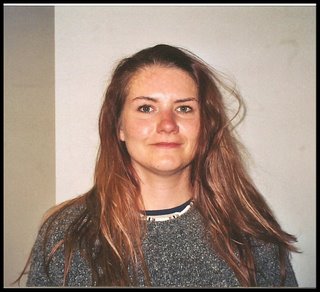 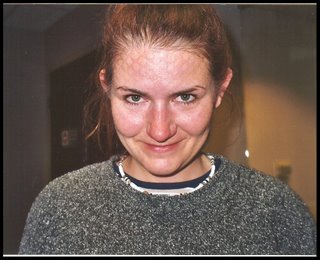 Photos of me after my cyberknife treatment sessions on July 14, 15, and 16 of 2004.
The above photos of me were taken after the cyberknife treatments. The mask is so form fitting and tight that lattice marks formed on my forehead temporarily. However, the mask was not uncomfortable. Before my first treatment they made a mold of my face using the blue mask you see pictured in the prior post. Many people who have had the treatment describe making the mask as a similiar feeling to getting a facial. I would not know as I never had a facial done before. What I can tell you is that it was warm and wet as if somebody was applying a polymer type of wash cloth to my face. Because the mask has holes, I was able to breath out of it freely.
Soon the mask dries into the uniform shape of your face and is no longer flexible and soft like silly puddy. The best analogy I can think of for it is when people make those egg shape crafts out of big balloons. You know the kind where you stick string in glue and then run it all over the balloon so you end up with a delicate looking egg shape that has hardened? Well I guess it is kind of like that.
I did not experience any pain during the treatment except for the weight of my head/skull being pressed upon the small pillow for so long. I have no idea what the time frame was as I was cut off from the world both visually and auditorially for 30 minutes. I estimate it started giving me a problem within 15 to 20 minutes as when I reached the point where I thought I could no longer stand it, the treatment was over and they were removing the mask. What would happen is that it felt like the back of my head was burning up or on fire! It has also happened to me since then in longer MRIs. It is caused from not moving the head and the weight of the head pressing on one spot. I was given a soft pillow pad under my head but if you have a sensitive scalp it does not matter.
I can't remember if it was the first or second treatment but at one point I was lying there alone in the darkness and quiet thinking about the radiation beams going into my brain. I had a horrid sensation that this was beyond my control and the beams of radiation were like little bugs scurrying randomly and sporatically around in my skull. I was terrified to move even the slightest hair for fear that the radiation bugs would burrow into a wrong part of my brain. It is a weird thing to hand your brain over willingly and know that once it has started there is no turning back. An organ is one thing but your brain is.....well heck it is your brain!
There was an intense amount of radiation delivered to my brain (20 gray/rads each treatment) but the dose was dispersed among several entry points of my skull so that the full 20 rads was delivered to a precise location within a mm of accuracy (the tumor or as one of my friend's had described it "one of the evil twins".......my description "brain moles"). Therefore the rest of my healthy brain tissue was subject to minimal doses. But still, the thought of cooking your brain can be a little unsettling. Yet in my personal opinion still ......It sure beats having your skull cracked open and disected apart (open brain surgery). It is no secret that I have and still do dread and fear brain surgery.
Afterward I was given a steroid pill (decadron) and advised to drink lots of water. The treatment dehydrates you some (hence the markings on my face and the dimples which are greater than what they are now even though I have lost weight).
When I went into the open sun it was like a bolt of lightening struck my eye sockets and head. I had a massive migrane which I thought was from forgetting my sunglasses. On the first day I had to stop at Kmart in Santa Cruz and buy some. I think I was also very cranky and impatient.
I also got incredibly nauseated and asked for antinausea medication on the 3rd day of treatment. The first day I felt pretty crappy on the drive to Santa Cruz but felt better after getting into the water. On the second day our friends KC and Dianne joined us. When we drove to San Francisco I literally did not think I was going to make it there. The short half hour drive was unbearable and we had to stop by the water overlooking the Golden Gate Bridge so I could get some air. It was actually rather cold but I was so sick that the cold air is the only thing that gave me some relief. I stood out there in my shorts for a long time until I had the chills. I have no idea how long it was but we watched the sunset (what I could concentrate on of it).
Take a look at the link for a small slide show of a few photos I have. The one of me standing in the tree is when I still had my balance and could freely climb a tree. I can no longer do so unless someone helps me in or out or there is some easy safe way for me to do so.
http://pg.photos.yahoo.com/ph/bluediverbeck/album?.dir=/815fscd&.src=ph&.tok=phlAIMFB4MOkNAda
Posted by Rebecca at 9:36 PM

Do you know how many "critters" you have?