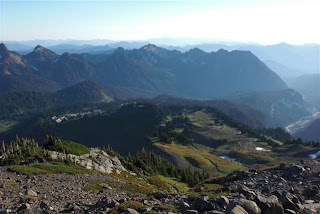 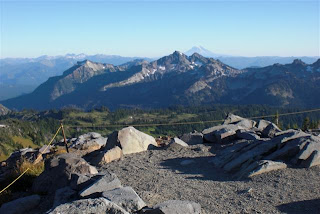 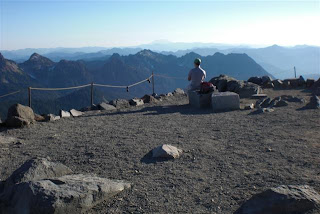 As I approached the famous Panorama Point on Mt. Rainier I threw my hands up into the air and exclaimed in exhilaration "I made it!". Unbeknown to me, a hiker saw me who was coming down the mountain from further up the trail. When I turned to face him I was a little embarrassed but then I thought "What the hell!". I did not care. If he had known what I had been through, he most likely would have done the same.
The very last time I had made it to this point was when hiking with my dad over labor day 2004. It was not even 2 months post radiosurgery for me and I was souped up on another dose of steroids to control the brain swelling I had been experiencing. Because it was still early in the swelling phase of the tumor, my balance and vision had not been fully affected yet. I actually had quite a bit of balance left and the steroids were carrying me through.
By spring of 2005, I experienced the apex of my loss of balance to the degree that I would fall over and not even realize it if I closed my eyes while standing on flat ground. It was very disheartening. With my soul so tied to the mountains and the sea, I was just devastated to be torn away from the activities I love (hiking and diving) and many more.
In 2005 I did not even visit the mountain. It was such a hard year. In 2006 I began to improve and we took a trip to the mountain for my birthday that September. For a change, I was not so concerned with reaching the highest elevation possible. Instead, we took the paved meadow trails and then with hiking poles I was able to make it part of the way up the unpaved trails. We reached my end point where the terrain became to rocky, uneven, and scary (I am not afraid of heights but of falling which is easy to do once you loose your vestibular function.).
In July 2007 I returned again with my aunt and uncle. The snow line was much lower at that time of year so we only went as far the fields of snow. The way up all the stone stairs was okay as I was using my poles. However, it was extremely slow going down and utterly terrifying for me! I imagine watching me inch my way down the cut out stone steps was similar to watching somebody agonizingly learn to walk again. It was pretty stressful but I had been determined to go up the far and had to bear the consequence of going back down (kind of like a cat climbing a tree).
This time it felt great and I went higher than I had with my dad in 2004. We (Harley and I) started out at the visitor center which is at 5400 feet. Panorama Point is at 6800 ft and we passed it. According to the map, the distance we traveled above the point, and the trail, I figure we went to at least 7000 ft. And did I mention I went all the way up without using my poles!? I used the poles for the way down but I felt fine and it was not so scary. I felt rather efficient and what took me so long is that I kept stopping to take photos! hehe ;o)
Here is a map showing our route: http://www.nps.gov/PWR/customcf/apps/maps/showmap.cfm?alphacode=mora&parkname=Mount%20Rainier%20National%20Park