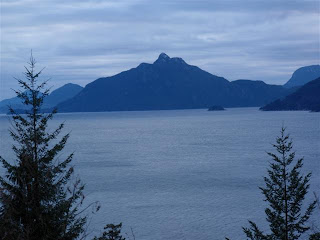 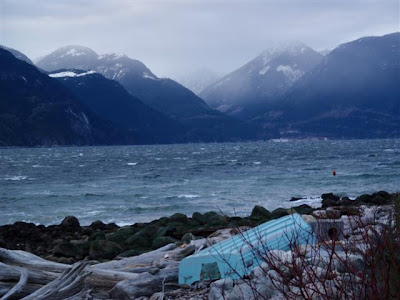 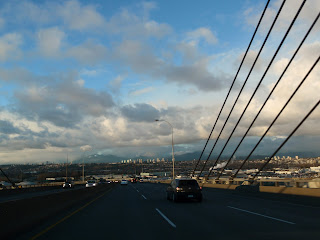 Ahh....can you tell I have an insatieable desire for the mountains? ;-)

Third time this year I have been out playing in them and the first month of the year is not even half over yet! I am making a weekly habit of doing so. hehehe

So now you know the reason for my absence. A week ago my trainer Merrie told me that she and Pedro were heading up to Whistler Ski Resort for their annual ski vacation. "Cool!" I thought recalling how we were marveled at its glory when we visited 14 years ago (back when we were avid downhill skiers).

Since I don't ski anymore after losing balance function, I just assumed those kind of places were no longer an option for me. However, when Merrie ran into Harley Friday morning she invited us to come up and join them. When she extended the invite again to me later that afternoon I immediately responded "I can't ski!" Then she rebuked "You can go snowshoeing." "Hmmn." I paused and thought about what a great idea I had not thought of doing. I never imagined going to a ski resort to snowshoe. Yet I am pretty new to the sport and have only been to 3 trails in the Cascades. Then I came back down to reality and responded "oh, well Harley has to work." Merrie fired back "I saw him this morning and he was thinking about it."
"Really?" I questioned trying not too get too excited in the event it would not work out. "Well I will talk to him later tonight."

To my delight, Harley had indeed given serious consideration to driving up to Canada for a few days to spend a day of snowshoeing. So once we were packed, off we went (no it was not as easy as it sounds and it took a long time for me to get my stuff together. Apparently I do not have spontaneous travel down pat yet.)

Due to missing the sign of the day Saturday-Tuesday, I am going to give you a few all at once related to the post and pictures.

Above in the first shot is the Canadian city of Vancouver, British Columbia off in the distance as we were approaching Saturday afternoon.

The drive along the highway from Vancouver to Whistler is breaktaking! It is a ride of twists and turns along a road winding between mountains jutting up from the water. Not a ride I would recommend doing at night! ;-)

The trip was a fabulous get away reminiscent of our younger days when we first moved to the NW. If you were asked a good description of part of our character it is that we LOVE to travel. Our lives would feel so incomplete if we were not out exploring the world. We have made a habit in our many years together to travel yearly.